In the Scottish Gaelic language, to which we would be introduced soon enough although we didn’t know it at the time, Scotland’s Edinburgh airport’s name is Port-adhair Dhùn Èideann. Language was to be a source of great amusement for both Hubby and me during our 16 day trek across the United Kingdom as you’ll see in later posts. As our flight circled in preparation for landing, I was glad I’d taken the window seat in the KLM Cityhopper we’d boarded in Amsterdam earlier that morning. I’d read enough novels by the Bronte sisters and Jane Austen and seen enough movies set in the UK that I think I’d formed an impression of how Scotland and Wales probably looked. Something hauntingly beautiful but somewhat depressing at the same time, as in the introductory photo above featuring the Pentland Hills near Edinburgh. And the weather, I just knew, would be dismal and terrible too. 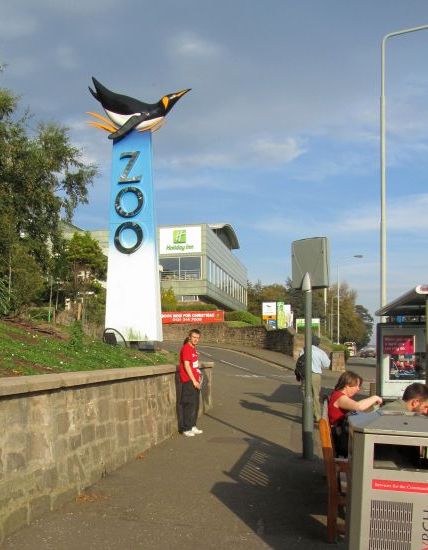 But I would be wrong. That’s our hotel, the Holiday Inn (behind the zoo sculpture), this one located on Corstorphine Road in the Pentland Hills area of Edinburgh–just three miles from both the city center and the airport. True, the skies do look cloudy, but this was snapped September 30, and you can see by the way people waiting for the bus are dressed that the temperatures are almost balmy. The man behind the bus post with the backpack is Hubby, which will clue you on the type of clothing we both packed for the trip.

On the advice of Grannymar, our blogger friend from Ireland, we’d gone prepared with layers which would normally serve us well this time of year, whether in this country or Europe. The problem was the bottom layer I’d packed–mostly knit pullovers over which sweaters, jackets and raincoats might be worn or a scarf added. Living in a dry climate the past 14 years, I’d forgotten how hot cotton knit can feel in high humidity and warmer temperatures. Just our luck that the whole of the UK was experiencing record high temperatures at around 30°C. (A quick way to convert Celcius to Fahrenheit is to double the number, then add 30. So that 30°C figure translates to around 90°F or close enough!) After a day or two I was praying for colder temperatures and resorted to wearing a short-sleeved t-shirt I’d brought along to sleep in. It very old (1988 vintage LTD), much too large for today’s fitted styles, and printed with bright blue fish. I decided it was better for people to assume I was fashion-challenged rather than crazy for wearing turtlenecks and long sleeves.

Many things about Edinburgh impressed me–stunning architecture, cobblestoned streets, the pubs on nearly every corner offering inexpensive but tasty food and drink, charming

tea  shops and bookstores, just the general charm and personality of the city, as reflected here in this close-up of just one of the hundreds of balcony gardens. Just as we were in India earlier this year, both Hubby and I enjoyed the ease and speed with which we were able to get about the city. Buses ran every 5 to 10 minutes until late in the evening when they were a little further apart, and for about the cost of two one-way tickets, you could get an all-day pass that allowed you to go all over the city as often as you liked. We were only there for two days, but when we weren’t on a guided tour on the Coach, we were happy to get about on our own.

And the people we met! On one of our bus excursions, we met a charming little girl of about 10 years who was riding in the upper berth alongside us. She was riding herd on two younger brothers, one of whom was nicknamed Monkey, she informed us, he was such a climber. That’s why they were on the upper deck. Her aunt who they were visiting sat a ways behind  with the baby brother. The whole family were in town visiting relatives for her father’s birthday. They were getting a cake and planned to celebrate that evening. They were looking for his birthday present. She went on to tell us all about them with such candor: which village she lived in, where she went to school, her grades and how smart her father thought she was, and which she unabashedly acknowledged. Bearing not even a hint of pretentiousness, totally comfortable,  the little girl and her family was but one example of the friendliness of the locals we would encounter throughout the trip.  I must add, however, that since we understood only about every other word, it’s a good thing she was so prolific.

Here’s just one example of one the churches of Edinburgh. It’s the St. Andrews and St. George Parish Church of  Scotland on George’s Street. The architectural style of the bell steeple and entry reflects the contemporary 18th century fashion for classical Roman forms and includes the “temple front” style portico with ceiling rosettes and clock. I chose it to show here because of–you guessed it–the stories around the shorter, round dome you see just to the left of the entry. According to our tour guide, the parishioners have two explanations for building the assembly hall in this round shape. One is that the Devil has no hiding place without the corners; another is that no one can hide when the collection plate gets passed.

Last but not least, let’s finish up with kilts. A Scottish kilt is a pleated, traditional outfit worn by the Highlander clansmen for hundreds of years. Yes, they are still worn, although the “traditional” plaid kilt wasn’t around until the eighteenth century. Before that Scotsmen wore knee length plaid shirts belted in the middle because they were too poor to buy pants.

Yes, there is a protocol associated with their wearing. First of all, they are most worn by the highlanders (northern Scotland), and then only or especially at special occasions. I snapped this picture of wedding guests taking a break outside the church.

The waistband should fit comfortably but snugly high on the waist, right below the lowest of the ribs. It should fall either at the knee or brush the top of the kneecap. The tartan, or plaid, pattern should reflect the traditional pattern of the ancestral clan, but if you don’t have a Scottish background, you might use a more universal tartan. (Google: Black Watch, Royal Stewart or Jacobite pattern for examples.) Appropriate accessories? A sporran is the leather pouch, used as a pocket, worn on a strap or chain that hangs in front from the waist over the groin area. Hose is worn in black or cream–never white. Black was originally for funerals, but is now a popular choice for everyday wear, while cream is best for evening or formal occasions. Ghillie brogues, which look like black and white boots, are the shoes of choice, while black or brown leather loafers–appropriate to the occasion–can be worn. The traditional kilt jacket is a “Prince Charlie” jacket, appropriate for weddings and other formal events, but for daywear or less formal events, a sports jacket, tweed jacket or even a sweater is appropriate.

As usual, I saved the best for last. How do you think these kilts–girls wear a kilt too, sometimes!–measure up to your new knowledge of kilt protocol? It’s not exactly the best quality, the picture I mean, but it’s what you get when you aim fast and low for that candid shot, and the perfect impression of our first full day in Scotland to leave you with. 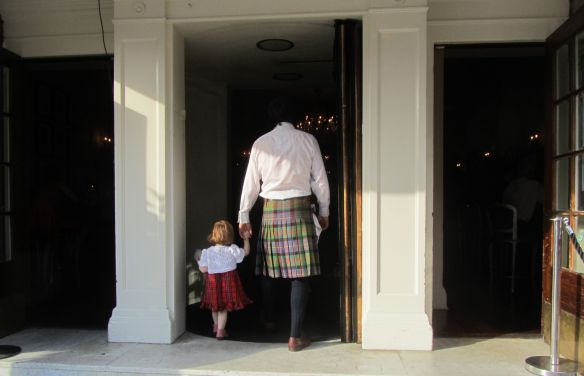 Next up, a discussion about castles and things.