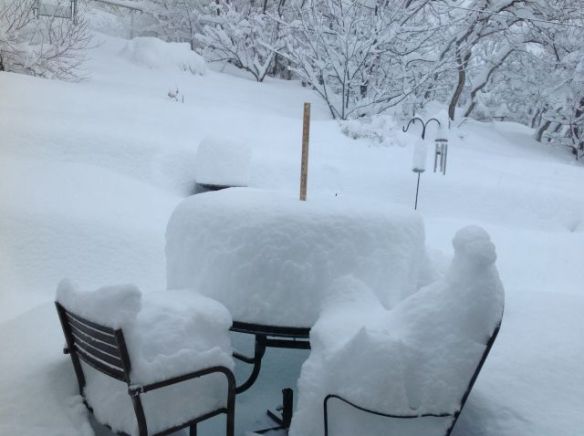 Today is Friday, it’s January 11, 2013, and we’re about as snowbound as we’ve ever been in the seven years we’ve lived in Utah. We should have paid more attention to the weather predicting turtle who lives nearby here in the shadows of Mount Olympus. According to local news sources, this season’s is the biggest snowfall accumulation in the valley since 1993.  E.T. (Extra Tortoise), 69, is a 17-inch-diameter desert tortoise, rescued by Tosh Kano in 1988 through the State Division of Wildlife Resources during the construction of the Tuacahn Amphitheater. She warned us this was likely to happen back in October. Kano was the public works director for Salt Lake County at the time, and over the years he noticed a correlation between E.T.’s appetite and winter conditions. He was so certain about her ability to predict winter severity that he based his yearly order for road salt according to E.T.’s “predictions.”

Kano said that normally she stops eating in September to prepare for her six-month hibernation, but this year she was eating  kale, mustard greens, parsley, and carrots until mid-October, so he knew something was different. Those are considered “super foods” in a turtle’s diet, thus he knew she was storing up fat for a long and hard winter. Other signs were noted as well. Acorns were bigger this year and there were more of them as well as more 100 degree+ days over the summer. I remember we were forced to take our neighborhood walks long after sundown because of the heat. Then we forgot about tortoises and  went on to Italy, extended our summer for several more weeks.   (In case you’d like to see E.T. and her owner yourself, to this KSL Utah channel 5 television site.)

It seems like a long time ago looking back now, but this picture proves we really did enjoy a warm interlude at Trevi Fountain in Rome this fall. Ahhh, it looks so sunny and warm. Legend has it that if visitors toss a coin into the fountain they will return to Rome. Should we hear E.T. is eating like a pig again this September, I may have to reconsider my swearing off airline travel if. I’m pretty sure that’s the quickest way to get to Italy, which sounds very appealing now.  :grin:.

For today though, we continue to look out the window to see if it’s still snowing . . . yup! it is, and is expected continue all day. The nearly two-feet snow cake on the back deck may come close to swallowing that yardstick Hubby left in it (above photo) if it doesn’t let up. Did I mention the basement furnace broke down last Sunday? It’s working hard at the moment, but it’s an old old unit we’ll be replacing next week just in case.

I’ll be back with more news in a few days. That is, if we don’t freeze first. Does anybody know how to build igloos? Cháo for now!