A long time ago I read somewhere that when baby birds first hack their way out of the shell, the first thing they see they will think is their “mother.” Wikipedia tells me now that in psychology, it’s called “genomic imprinting.”  That’s must be how those photographs of a dog with baby chickens or ducks following behind a dog came to be. When I was a kid, I had a three-legged pet pig that used to drag himself along behind me because I was the one forthcoming with food treats. My mom must have loved having her flowers crushed by a pig dragging his 60 pound (eventually) pot belly through them.

Naturally, when I noticed sometime this weekend that a bird had shat nearly smack-dab near the middle of the picture window, I wondered who in thunder had taught him–or them, as there were TWO big gray and blue spats tinged with white–how to poop sideways! That took some clever bird(s). Sunday morning found me on the front deck with a stepping stool and assorted soft rag teeshirts and a can of window cleaner in hand.  Thinking back over the years, I realize I’ve known quite a few clever birds who were quite entertaining in their own way, but never one that could do that sideways pooping trick. 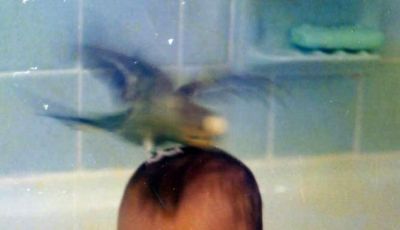 This is Henry, the parakeet we acquired when we lived in Connecticut. As you can see, Henry had the run of the house most of the time. His cage sat on daughter #1’s dresser with the door propped open, providing a bridge to the carved pink elephant embedded with tiny pink mirrored diamond shapes he liked to use as his toilet. It was continually covered with droppings deposited as he sat jabbering to the parakeet in the mirror who looked exactly like him! He was so excited by his friend in the mirror that he also left slobber markings there. Cleaning tasks were constant, but it was worth it for the entertainment he provided for the whole family. He was quite content to fly around the house to wherever people were gathered. In time, he even taught himself to talk.

Then we moved to Ohio, taking Henry with us, and life began to change for us. The girls were growing up and eventually going to school. One day the older daughter came home with a request. Could she please bring a baby chicken home to live with us because the school year was ending and the chickens hatched in the classroom all needed adoptive homes. How could I–who grew up with mostly animals and chickens as my only friends for the first five years of life because we lived in on a farm in the boonies–say no? So that’s how Birdbrain came to live with us.

Birdbrain was a fast-growing white leghorn hatchling. By the time he came home with us he was at the gangly all-leg phase and losing most of his downy biddy feathers. Suffice it to say he was not his handsome best, and yes, he was a rooster. We set his big cardboard box house on the grate by the fireplace next to Henry’s cage. Now our Ohio house was in a neighborhood in a rural setting and we were susceptible to mice invasions.  So with the danger of possible mice lynchings, Henry was only allowed out of his cage when we were present.

One day we were rather startled when we returned home after an outing to see Henry’s cage door hanging open, with Henry nowhere to be found. We called and called, and when that didn’t work we spread out over the house, down in the basement, on a frantic search. Then somebody decided to check to see if Birdbrain was in his box. He was. And so was Henry. Birdbrain was acting like a chicken acts, scratching and peeping happily in the chicken feed sprinkled on the floor of his box. To our delight, so was Henry. Apparently he’d made a new friend, the best kind, one who could teach him new tricks. We got rather used to seeing Henry visit Birdbrain in his box, and if he wasn’t in his cage that’s where he’d be. One day we decided to let Birdbrain visit Henry. We opened the cage door and carefully set him inside and Henry dropped down to the floor from his perch and joined him scratching on the grit-lined newspaper. Not long after that, there Birdbrain was one day–balancing awkwardly on Henry’s perch, while Henry clung to the cuttlebone on the side. Who says an old bird can’t learn new tricks? True story!

As for the culprits involved in my poop-splattered window, who knows who imprinted them with the ability to do their dirty deeds? I dismiss  them as two teenagers, most likely, out past midnight after they’d snuck outside their bedroom windows, flying about looking for ways to do a little imprinting of their own. They had just happened by our house when they finally perfected their little joke. I must say, the clean window looks smashing, regardless of how it came about. 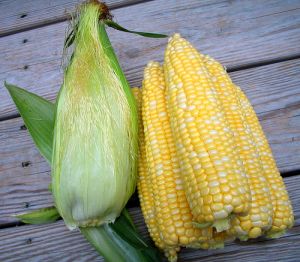 I know summer’s right around the corner because I purchased my first ears of corn from the grocery this week, and know that in a couple more months it’ll be available at the farm markets. My favorite way to eat corn is to cream it the way generations of women in my family did it, and still do as far as I know, but Hubby and the rest of our little family here in Utah prefer it on the cob, cooked on the grill or steamed. [Incidentally, my son-in-law who grew up in Germany is appalled that anyone in his right mind would eat it at all (!) because Europeans all know that corn is pig food. To that I say oink, oink, oink. Simply leaves more for me!]

With near perfect timing, a friend recently sent us a link to a video demonstrating a way to prepare it without having the brush the silks out. It combines taking the shuck off and cooking in a couple of easy steps, so naturally Hubby and I could hardly to wait try it ourselves. I’m here to affirm it works beautifully! Comes out clean as a whistle with nary a pesky silk hanging on! All you need to do for perfection is to slather it with a little butter.

Now this may be all old news for you, but if so I won’t apologize. If you knew already, then why didn’t you tell me!?

Some of you asked about the family project that was driving me to distraction in November and  December, and I kind of dropped the ball in responding. I’m now ready to reveal this unwieldy project for whatever it’s worth. It’s a four-generation “tree” of family members of the Indian side of our family. Beginning in the middle, there’s Hubby’s father and mother (with a larger photo just above), then fanning out on both sides with each of his siblings, and their children and grandchildren, all surrounded by candid photographs from each family. Thumb sized pictures are also shown in each box, along with the birth-marriage-death dates, so that future generations can easily pair the person with the name. My daughters have commented on how many facial characteristics–head shape, lips, etc.,  they share with some of their aunts, uncles and cousins in India. It was done using Microsoft Word 2010 in a word document with all the complications encountered in producing a poster sized document on a much-smaller scaled computer monitor, drawing the text boxes within text boxes with Word’s “paint” program in the manner of “eyeballing to make everything fit. Miraculously, everything did! 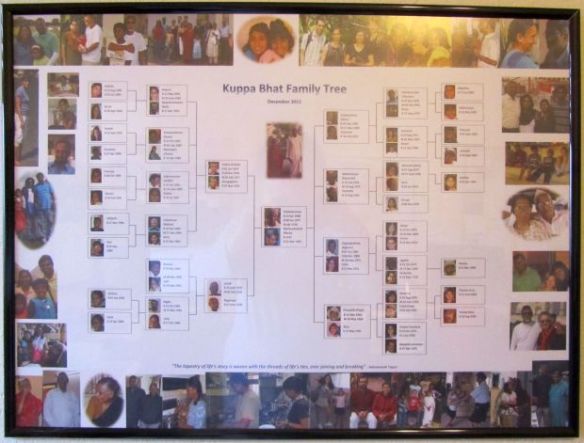 Some of you may remember our planned 2010 Indian family reunion in Goa where we planned a weekend to reacquaint our daughters and their families with Hubby’s side of the family. Unfortunately, my health concerns precluded my participation, but we urged the family to proceed without us. Our daughters, not having been to India in about 25 years, asked their father for a crash course of sorts–who was married to whom, who were their children, their father or mother and so on. That may have been when the initial seed was sown to develop a patriarchal family tree for everyone’s benefit. This idea was further reinforced when we had most of Hubby’s relatives  based in the US visit us during the summer. Family genealogies were typically passed along orally, or hand-written by elders to be passed down, so somebody knew some family specifics, but despite the effort so much family history seems to get lost. I, for one, am a strong believer is preserving and strengthening family links. So for my own sake and that of our small family, I decided to undertake the task of setting down–as officially as possible within my own limitations–a family register for the current four generations, to coexist with that of my own family origins. With the current trend of geologically scattering of families, for ours it would be a beginning family connection all-around.

This undertaking was by no means a simple task. As in the case of hubby’s family in South India, complications such as there being no family surname such as Smiths or Browns as we have in the West. Instead, a child with a given name such as Fred will often be identified as Fred, son of so and so. In addition, the families often use  “clan” names which may indicate the ancestral village of their origin and the sub caste the family belongs to, although not routinely used as an official or daily use name. To complicate the matter further, the child “naming” ceremony occurs about 10 days after the birth of the child and so the hospital birth records do not identify the child with any name except as son or daughter of the father so and so. Thus, use of birth records to construct a family tree is out of the question.   The way the children in the Tamil Brahmin families are named also adds another layer of confusion. Depending on the sex of the child the given name  may be a god’s name, or a deceased grandfather or grandmother’s name.  Very often the grandparents and other close relatives weigh in on the names and the parents try to accommodate everyone’s wishes.  So, the children end up with official name (for school records) and several other names given by the relatives.  Most of the time, as in this country, the long names are shortened with nicknames for daily use.  That explains why so many of Hubby’s family are known by different names within the family. I think you can see how, for anyone born in the West, it makes for much confusion about who’s who in the family. The project was duly completed and mailed to each family a week or more before Christmas.

I believe it quite appropriate to end this posting with the same quote by Rabindranath Tagore printed on the poster itself (just above the bottom picture border). “The tapestry of life’s story is woven with the threads of life’s ties, ever joining and breaking.” Ever joining indeed! As with these kinds of charts, ours has already become obsolete, but in a good way. One of Hubby’s nephew’s wife in India just gave birth to their second daughter few days ago. As per the custom, we are waiting to learn her name.