Hubby is always on the lookout for the perfect new television as replacement for the current one he expects will conk out within a year or so. We’ve already spent more than several-hundred on replacement parts in the nearly 10 years we’ve owned it, and you can now buy it new for around $400 (ten years ago it cost $4100). He would love in its place a 90-inch “intelligent design” which may or may not have been invented yet. One that will make it a center piece of the whole family room, for viewing, listening, and tapping into the Net for everything from movies to up-to-date stock prices (since we’ll certainly need to have sound investments to afford it.)

The problem I have with this new arrangement is that what to do with my book wall which has four shelves spanning over 12 feet? Some books I’ve read and collected over the years are next to impossible for me to part with. Over the 44 years we’ve been together I’ve collected quite a few as you can see. 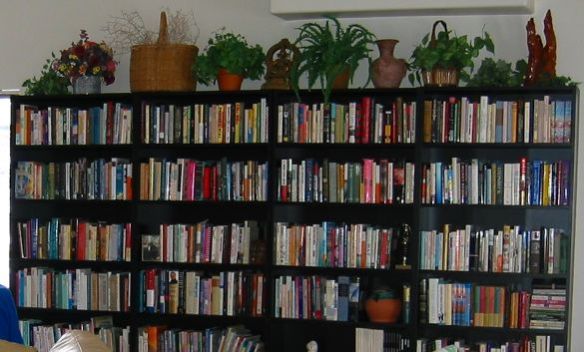 He says I should begin to get rid of them so he won’t have to worry about what to do with them if I kick the bucket first. I’ve tried over the years to defend my book habit by being mostly stubborn–after all it was better than tippling the proverbial bottle wasn’t it?–but I never had quite the words to defend myself until now. Then I found a quote in Facebook.

Of course anyone who truly loves books buys more of them than he or she can read in one fleeting lifetime. A good book resting unopened in its spot on a shelf, full of majestic potentiality, is the most comforting sort of intellectual wallpaper.

I’m sure I always knew it, intellectually anyway, but now I know it in my heart that I’m not the only one who feels that way. So I guess we’ll just have to find a way to arrange his giant TV screen, maybe a little more sensible size more in line with the size of the family room, somewhere in between the books. We’ll call the wall “intellectual wallpaper” connecting old and new technology.

14 thoughts on “Intellectual Wallpaper: in defense of bookaholics”