Today I’m posting–with permission–a children’s book written by and illustrated by my younger daughter. It’s a new adventure about Flat Stanley. In case you’ve never heard of Flat Stanley, he’s a character created in a children’s book by Jeff Brown in 1964. The plot involves Stanley Lambchop and his younger brother Arthur who are given a big bulletin board by their Dad for displaying pictures and posters. He hangs it on the wall over Stanley’s bed.  During the night the board falls, flattening Stanley in his sleep, but Stanley survives and makes the best of his altered state. Soon he is entering locked rooms by sliding under the door, and playing with his younger brother by being used as a kite. Another special advantage is that Flat Stanley can now visit his friends inexpensively by being mailed in an envelope. He even helps catch some art museum thieves by posing as a painting on the wall. Eventually Arthur changes Stanley back to his normal shape with a bicycle pump. To facilitate easier reading in case the monitor you’re using is smaller, I’m duplicating the text inside brackets under each picture. 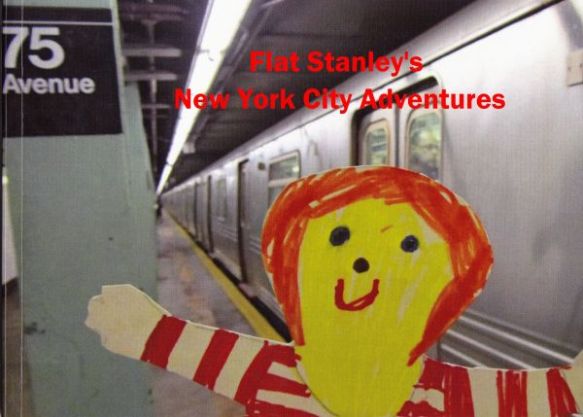 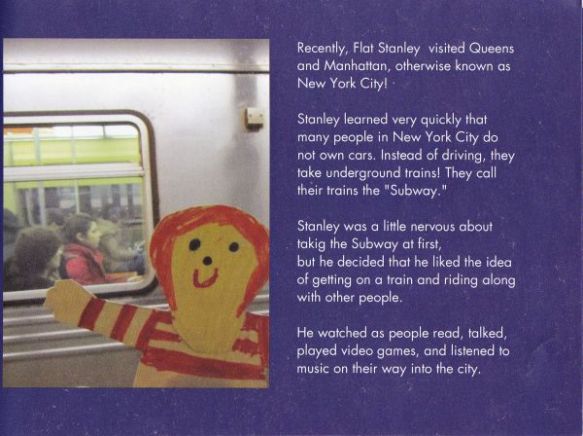 [Recently, Flat Stanley visited Queens and Manhattan, otherwise known as New York City! Stanley learned very quickly that many people in New York City do not own cars. Instead of driving, they take underground trains! They call their trains the “Subway.” Stanley was a little nervous about taking the Subway at first, but he decided that he liked the idea of getting on a train and riding along with other people. He watched as people read, talked, played video games, and listened to music on their way into the city.] 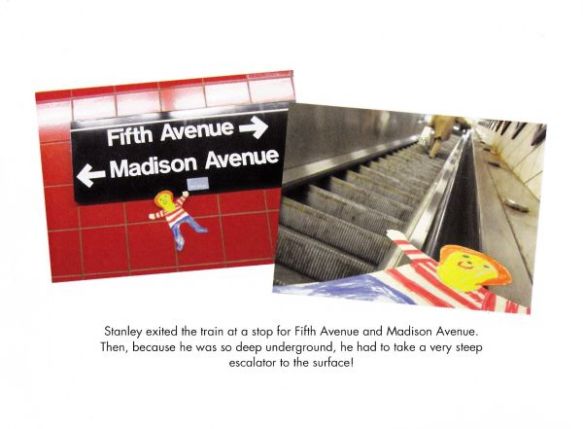 [Stanley exited the train at a stop for Fifth Avenue and Madison Avenue. Then, because he was so deep underground, he had to take a very steep escalator to the surface!]

[Luckily, this station had a helpful map to show Stanley where he had arrived and where he could take the subway from here.] 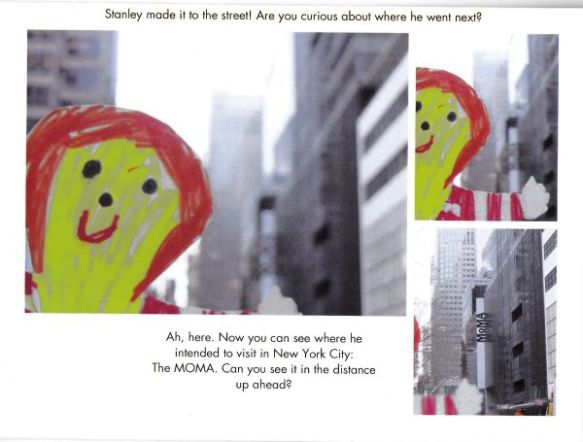 [Stanley made it to the street! Are you curious about where he went next? Ah, here. Now you can see where he intended to visit in New York City: The MOMA. Can you see it in this distance up ahead?] 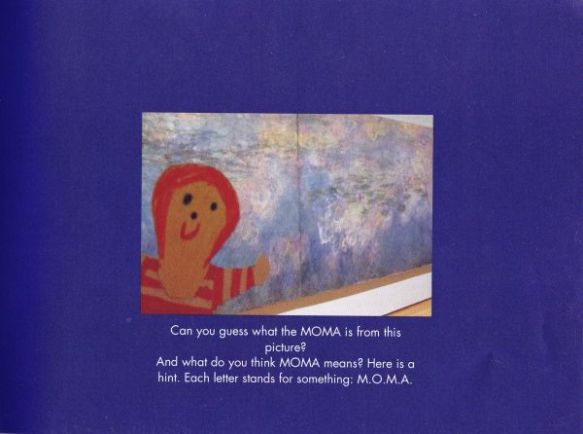 [Can you guess what the MOMA is from the picture? And what do you think MOMA means? Here is a hint. Each letter stands for something: M.O.M.A.] 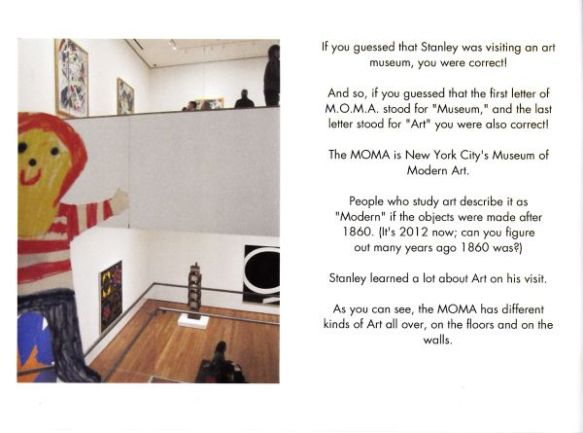 If you guessed that Stanley was visiting an art museum, you were correct! And so, if you guessed that the first letter of M.O.M.A stood for “Museum,” and the last letter stood for “Art” you were also correct! The MOMA is New York City’s Museum of Modern Art. People who study art describe it as “Modern” if the objects were made after 1860. (It’s 2012 now; can you figure out how many years ago 1860 was?) Stanley learned a lot about Art on his visit. As you can see, the MOMA has different kinds of Art all over, on the floors and on the walls.] 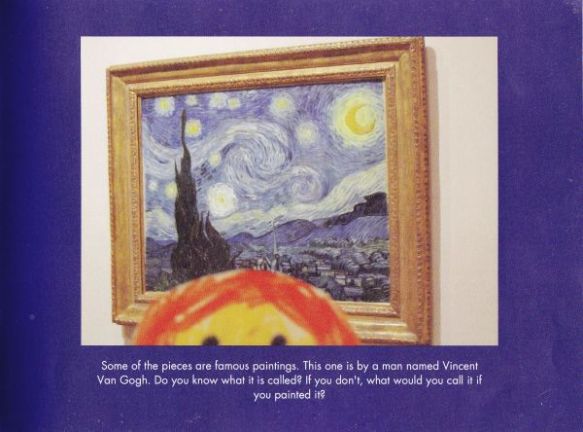 [Some of the pieces are famous paintings. This one is by a man named Vincent Van Gogh. Do you know what it is called? If you don’t what would you call if it you pained it?] 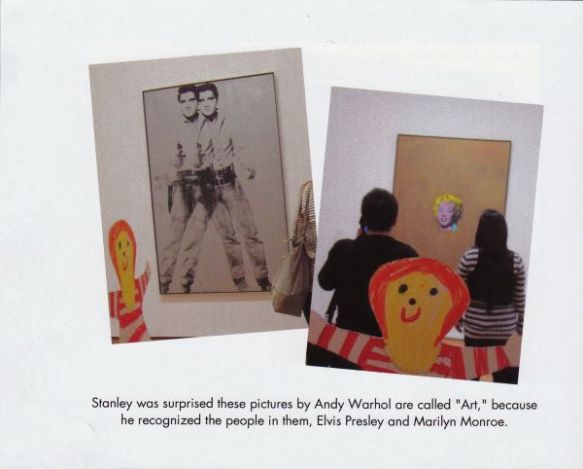 [Stanley was surprised these pictures by Andy Warhol are called “Art,” because he recognized the people in them, Elvis Presley and Marilyn Monroe.] 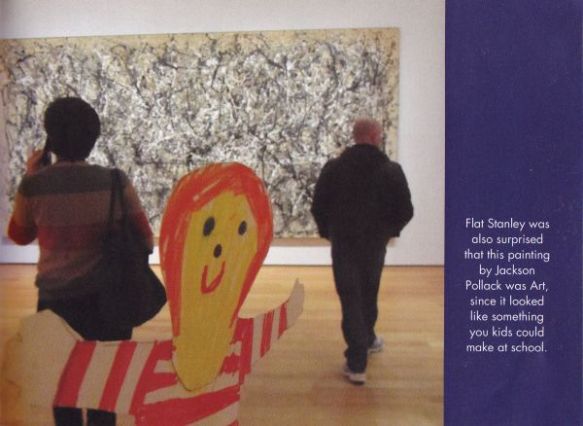 [Flat Stanley was also surprised that this painting by Jackson Pollack was Art, since it looked like something you kids could make at school.] 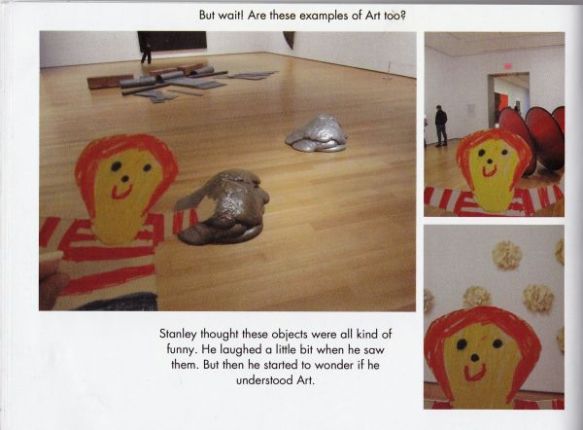 [But wait! Are these examples of Art too? Stanley thought these objects were all kind of funny. He laughed a little bit when he saw them. But then he started to wonder if he understood Art.] 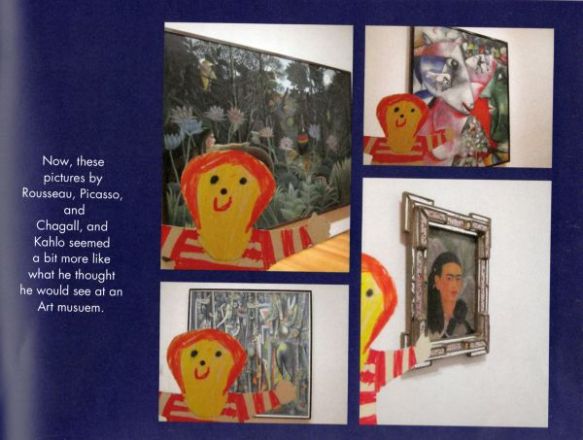 [Now, these pictures by Rousseau, Picasso, and Chagall, and Kahlo seemed a bit more like what he thought he would see at an Art museum.] 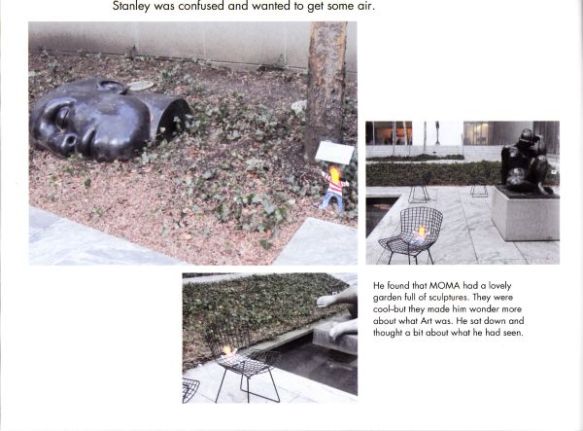 [Stanley was confused and wanted to get some air.  He found that MOMA had a lovely garden full of sculptures.  They were cool–but they made him wonder more about what Art was. He sat down and thought a bit about what he’d seen.] 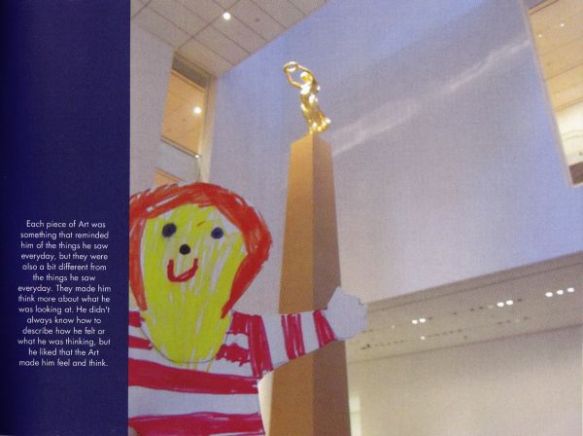 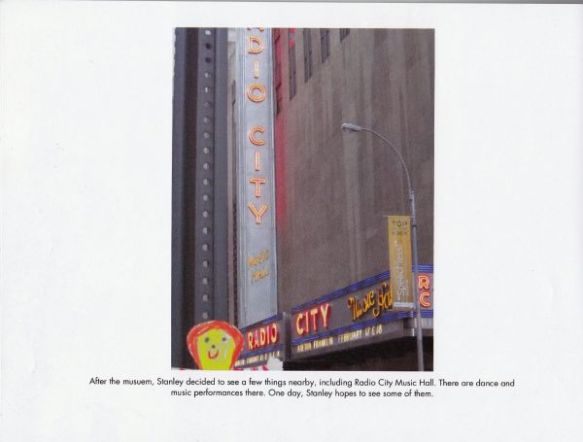 [After the museum, Stanley decided to see a few things nearby, including Radio City Music Hall. There are dance and music performances there. One day, Stanley hopes to see some of them.] 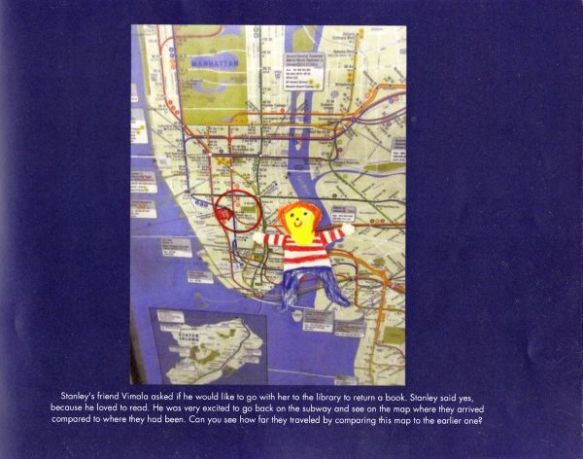 [Stanley’s friend Vimala asked if he would like to go with her to the library to return a book. Stanley said yes, because he loved to read. He was very excited to go back on the subway and see on the map where they arrived compared to where they had been. Can you see how far they traveled by comparing this map to the earlier one?] 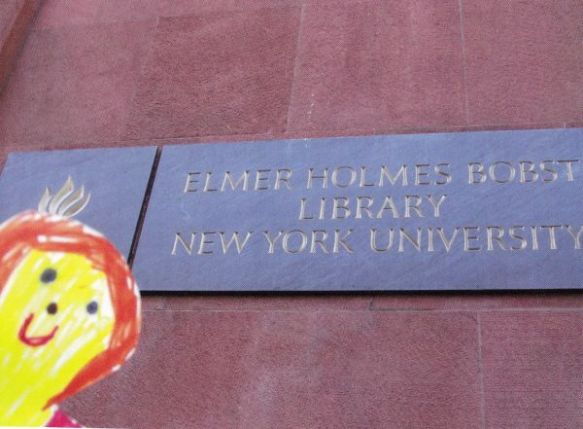 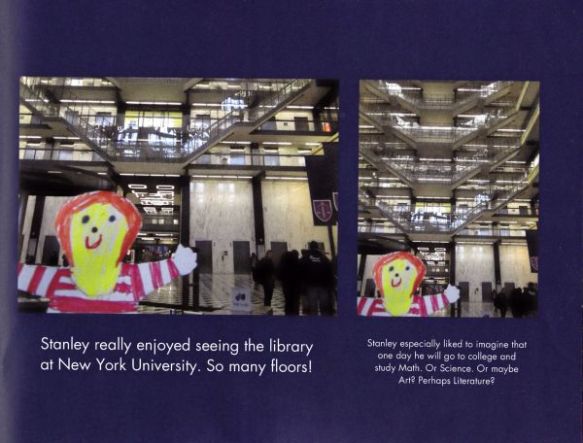 [Stanley really enjoyed seeing the library at New York University. So many floors! Stanley especially liked to imagine that one day he will go to college and study Math. Or Science. Or maybe Art? Perhaps Literature?] 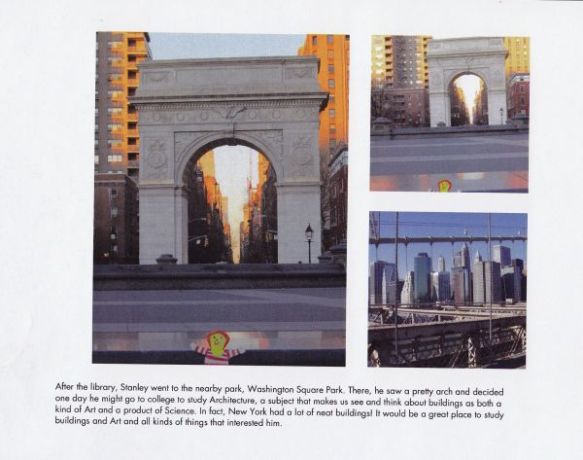 [After the library, Stanley went to the nearby park, Washington Square Park. There he saw a pretty arch and decided one day he might go to college to study Architecture, a subject that makes us see and think about buildings as both a kind of Art and a product of Science. In fact, New York had a lot of neat buildings! It would be a great place to study buildings and Art and all kinds of things that interested him.] 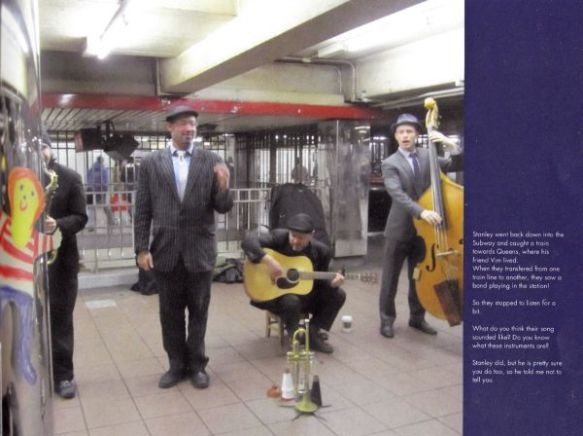 [Stanley went back down into the Subway and caught a train towards Queens, where his friend Vim lived. When they transferred from one train line to another, they saw a band playing in the station! So they stopped to listen for a bit. What do you think their song sounded like? Do you know what these instruments are? Stanley did, but he is pretty sure you do too, so he told me not to tell you.] 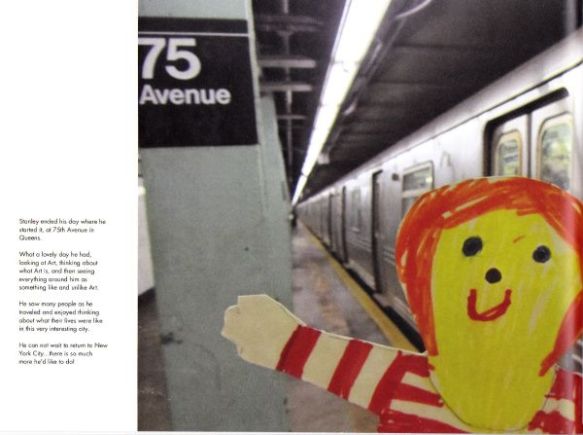 [Stanley ended his day where he started it, at 75th Avenue in Queens. What a loved day he had, looking at Art, thinking about what Art is, and then seeing everything around him as something like and unlike Art. He saw many people as he traveled and enjoyed thinking about what their lives were like in this very interesting city. He cannot wait to return to New York City…there is so much more he’d like to do!]

For more information on Flat Stanley, check back with Wintersong on Monday.