So much has been going on I hardly know where to start. Last Friday the hubby disappeared–he does that a lot since it must be a great challenge to live with an older woman (he’s exactly 10 months younger, you see).    I was in the office because there had been a telephone call a few moments before that I expected Hubby would answer, as I was sure he knew I was busy catching up on my ironing in the bedroom. But he didn’t. After four rings, the answering service picks up. I wondered why he hadn’t answered–so I went looking for him, deciding first to check to see if the missed call had been important or if there was a message. The doorbell rang. I waited a moment for Hubby to appear because I was still in my pajamas even though it was nearing 11:00. Then it rang again, this time more urgently.

What to do? First I called out to Hubby. No answer. Where was that man this time? I can see the front stoop from my office window, so I glanced out and saw the back of a young man’s head, but I could tell from the voices there was at least one other person with him. My first thought was missionaries. Or Jehovah’s witness.  Now I have nothing against either group, but I was so behind on seasonal switching out chores I truly didn’t have time to chat. The doorbell chimed again, then the banging began. I started to the bedroom to find a robe, but when I saw the heavy winter fuzzy hanging there, I thought it would look sillier than the white tee-shirt with blue fish (yes, the very one I was forced to wear in Edinburgh in September when the heat wave hit) and the blue plaid pajama bottoms I had on.

I was so rattled, maybe startled is a better word, as I opened the door and saw the black haired young man was Ben, my NY daughter’s Significant Other, and two women. Time seemed to stop! What in heaven’s name was Ben doing here? It was when shouts of “Happy Birthday” or “Surprise” or something like that it hit me! The next day I would be having a significant birthday–the big seven and O! Hubby has always said that’s an important birthday in India, but he usually had such trouble keeping secrets and he gets so excited that I always know something’s afoot. I’d already figured out that he and the daughter who lives down the street were possibly planning something bigger than the usual dinner and cake she usually prepared. I even told him please don’t throw a surprise party or making a big deal out of it. Particularly this one! His answer was Don’t worry. You know we aren’t party people! Suddenly Hubby appears out of nowhere, and chores and everything else were forgotten. For this birthday and Mother’s Day, the whole family would be here; they’d all been planning it for months! It was the first time I ever remember being totally taken by surprise in almost my whole life.

Of course everyone came bearing gifts–themselves for the festivities (dinner out at our favorite Indian restaurant that evening and dinner with favorite cake at daughter’s house onn Saturday), books, a new linen blouse, and lime green sandals with such pizazz I’ve hardly taken them off my feet since. I am one hot mama–or grandmama–as the case may be! I’m planning to post a picture of my feet in the new shoes just as soon as I can get to the store and buy some nail polish and paint my toenails! Crimson or Cerise. Or how about Hot pink? 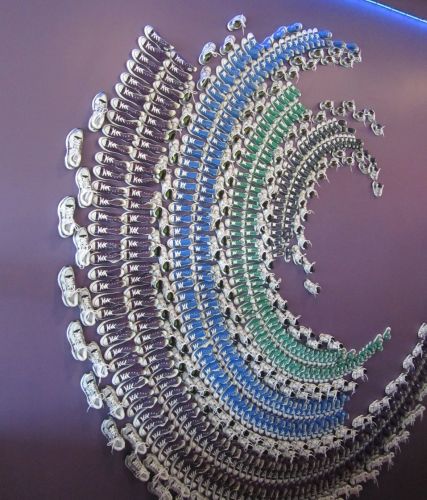 As for birthdays, I think 70 is a good time to start getting funky. You probably remember the book and cards from the 70s, so you know the drill. When I’m an old woman I shall wear purple! I’ve even begun to plan a new color scheme for the big room of our house that we plan to have repainted next year. One purple accent wall–with a natural gray or light charcoal walls all around with white wooden trim! (Let’s see if I still have the nerve next year when the time comes!) I got the idea from the new Community Center (gym, library, cafe) that opened in our township just a few weeks ago. Just in case it’s clear what that artwork is made of, here’s a close-up: 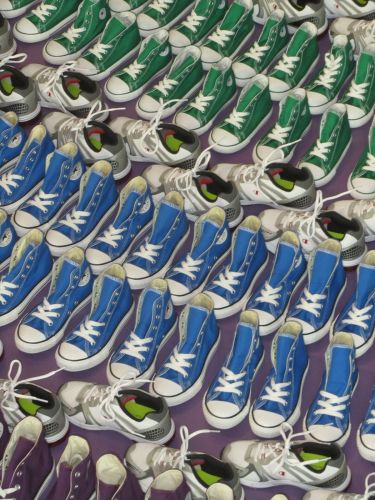 As for birthdays, especially the really really big ones, I think 70 is a good time to start counting backwards. Next year I’m going to be 69. Again. And I’m really looking forward to 21!