During our unplanned extended stay in Bombay, Hubby’s family went out of their way many times to see there were enough things to do so that no one would be bored, yet at a pace even an old auntie with a hip injury might endure. After a fantastic seafood  lunch with his nephew Raghu and niece Malavika, where I gorged myself on seafood in general–shellfish in particular–Malavika took the afternoon off work to take us to an art show. The Kala Ghoda arts festival is a nine day street festival that includes arts and crafts, exhibitions, seminars, dance, music, theater, heritage walks, and special events for children. Since 1999 when the district hosted its first show, the festival has proven to be a popular event in Bombay each year. One of the greatest things about it is that it’s all free, too! It’s quite a big affair and we were only able to see a small portion of the hundreds of events offered.

Artists everywhere are inspired by the same themes that inspire and complicate the lives of people all over the world. This one, when I saw it from afar, made me think of people made from butter, and I’m sure the artist would be mortified to hear that so we’ll not tell him will we? Actually, the green placard on the end of the table tells me that this artist’s work–Lalit Patil’s Camouflage Harvest–focuses on the harshness of the everyday work environment where man seems caught between religious faith and politics. That certainly seems to be the case in the U.S. Congress these days. 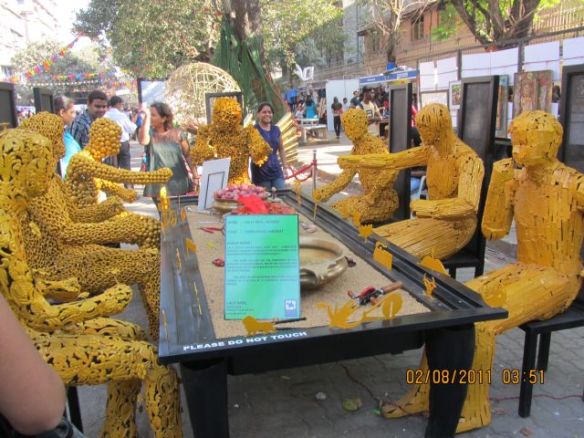 Which inadvertently leads me to thoughts of a horse’s ass. I’m always impressed with anyone who can take what seems to be perfectly useless metal pieces from the scrap pile and make something of them. The creator of this horse is Ilyas Ahmed, who began scrap metal art as a hobby in 1993. At the time he was an oil company employee who worked a lot on ships, but he soon developed his passion for artinto a full time art career creating different sculptures with different scrap metals. A stationary bunch of chains make up the eye-catching tail of this horse. Neat, huh?

No art festival I’ve ever attended has ever had characters from religious epics wandering around, or at least not that I remember. The character in red here is the monkey god, Hanuman. He’s a central character in Ramayana, where he played an important part by rescuing Lord Rama‘s wife Sita–who had been kidnapped and taken away by the evil Lanka King, Ravana. Maybe you’ll better understand why I’m so taken by that story if I tell you another. In 2002 a cartoon animator named Nina Paley moved with her husband to Trivandrum, India where his new job was. She was beginning to gain notice as an artist in her own right and found it necessary to travel to NYC on business. While she was gone, he divorced her and made it impossible for her to to return to India. Not knowing what else she could do to keep life and limb together, what else could she do but move to Brooklyn and get back to cartooning.

While getting herself together once more, she couldn’t help being reminded of the Ramayana epic she’d encountered in India. You see, after Hanuman returned Sita to Rama (whom she’d pined for the whole time she was in Lanka with that evil king), he spurned her. Why, you may wonder? Because he was convinced she couldn’t possibly have remained chaste during all those years she’d been away. Long story short, eventually he takes her back. She’s so happy, although I can’t imagine why. He had lots more wives to sleep with all that time after all. Sita’s story was close enough to her own as to provide inspiration for Ms. Paley to produce a short animation featuring a torch song from the 1920s, Mean to Me. I found it several years ago on YouTube, and it has since spawned many different versions, and Ms Paley has apparently made her mark in the world of animation and cartoons. If you ever need a good chuckle and have some time to kill, go to the YouTube website, type in Sita Sings the Blues for several (modern) variations of Sita’s story. If you can spare the time, look for the original version which won accolades from none other than movie critic Robert Ebert. Be sure to keep your eye peeled for the blue-skinned Rama (Sita’s husband) and Hamunan the monkey god, as well as the evil King Ravana. All versions are quite entertaining, and worth it for the music alone.

By the time we’ve covered the other art venues–the photography exhibit, the paintings, the craft exhibits–and sandwiched time to watch a couple of dance performances in the outdoor theater, we ditched the rest of the festival. There’s just too many things to see and do in only one day, and oh! my aching feet!  We walked a block or two behind the art venue to the Taj Mahal Palace Hotel and Tower. While we were there we decided to check out the tea room. But not before one last shot of the festival area though. Why do I have the feeling that we’re being filmed or photographed by that fellow in the center with his mobile phone? Everyone is a photographer/filmographer these days! Who was it that said all the world is a stage? Well, these days that’s true. We’re all actors on it? 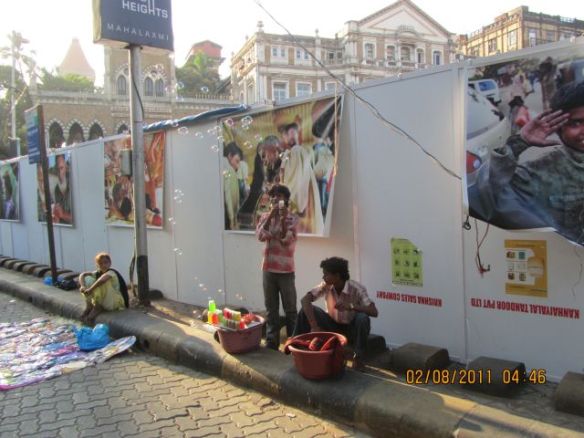 Here we are standing inside the grounds of the Gateway to India area where we’ve been people watching. Across the street is the hotel and the tower stands adjacent to it (bottom photo). This was the hotel that suffered attacks by Pakistani terrorists in 2008. 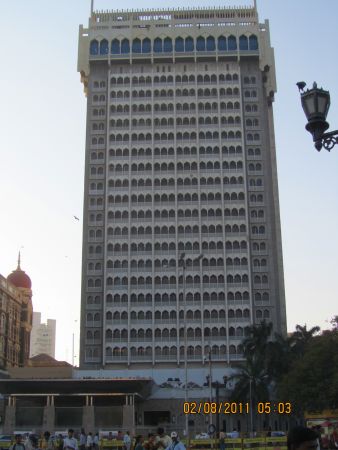 Of historical significance, President Obama, during his November 2010 visit to India, was the first foreign head of state to stay there after the attack. Armed (presumably) security guards are everywhere, but no one tries to keep us out. We look like the quintessential American tourist as we walk through the metal detectors on the way inside. Here we are coming in from the side of the building, passing through the lobby where we pass elegant stores with exquisite displays of jewelry and art. There’s Hubby, looking a big peckish, pausing for a spell beneath another set of horses. Clearly time for a break.

This is the nearest thing to a tea room we could find. Behind that column in the center, a young very blonde woman had been sitting moments before this picture was taken. The waiters had been wrestling with the two very young (~4 and 5 years), very blonde, in fact very beautiful children dressed in designer clothes. The boy was running about the room while he kept trying to open the door to run along the corridor. The harried waiters kept pulling him back inside while the girl kept shaking her finger at him and admonishing him as if she were the mother. Which she might as well have been seeing as how the real mother was completely oblivious to what her children were doing. Clearly she was quite accustomed to others watching her children. No wonder so many eating establishments are beginning to ban children! 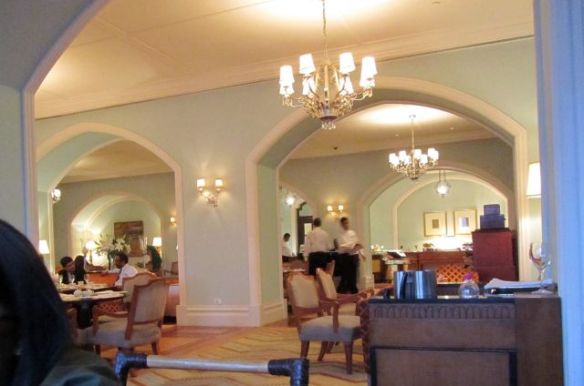 We asked for, and got a table facing the bayside where we were able to see the ships and boats, and people strolling by. I was a little disappointed to see a buffet laid out with food (under the pictures above on the right). Somehow I never did like buffets, not even this one in a tearoom at the famous Taj Mahal Palace. One of the things I’d not tried on this trip was the Bhel Puri, which is one of Bombay’s most famous specialties. In fact our tour guide from the previous post had told me that the best Bhel Puri should be bought from the stands at Cowpatti Beach outside. Since we were here looking out rather than out there, I decided to order mine here instead. Basically, it’s made with puffed rice, small deep fried puris, onions, potatoes, raw mango, sweet and sour chutney. Like all of Indian foods, every establishment has its own version. Unfortunately I was still too full from lunch to be a very good judge of the Taj’s offering, but I’d certainly order it again.

Dusk was fast approaching as Malavika delivered us back to Raghu’s office. I learned that Indians are accustomed to getting home for dinner late in the day. Here Raghu drives us home to his family’s condominium in the suburbs, a drive that routinely takes two (or more) hours, not because of distance, but because of traffic. By this time, he has probably secured a driver–one of the perks for many young professionals in India.

By now we’ve taken this drive several times before, enough that I begin to recognize places along the way. As we near home, there’s one last photo opportunity, a wedding party in full swing in a brightly decorated commercial wedding hall. Better than Las Vegas!