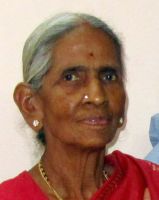 Very early the second morning after our arrival in Bombay, we flew off once again–jet setters we are!–to visit Hubby’s sister and brother-in-law in Nagpur where  Hubby was born and often refers to as “home.”

This is his sister Saradi.

And this is her husband, Dr. Nagarajan, the author of some of the more distinguished comments on a few of my Wintersong posts. Quite the educated pair, he holds several PhDs as well as one D. Litt already and currently working on a second. She earned her master’s degree after her kids were born. These are the posed versions of the two, the resulting likeness you get when you ask someone if it’s okay if you take their picture. Very nice, but only revealing how you looked the day the photograph was taken.

But do they show the real “you”? Invariably the pictures I like best are those taken without warning, preferably after someone has just cracked a joke or repeated an old family story. This is my favorite pictures of these two; it’s the image of them I now carry around in my head. 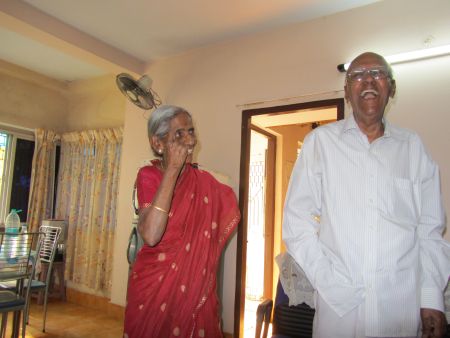 Then, as is often customary when you visit someone’s home for the very first time–particularly when you’re staying overnight–there’s a quick tour to show you where things are. This is Saradi’s kitchen with that familiar two burner stovetop similar to the others I’ve been seeing in homes I’ve visited (and the houseboat in Kerala). 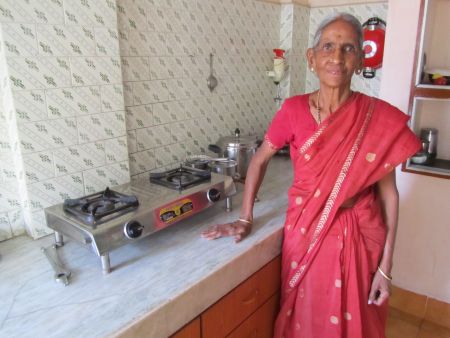 When I spotted this sewing machine in an extra bedroom, it took me back to my childhood and my own mother’s old straight-stitch Singer sewing machine. This model is India’s answer to Singer, an Usha,  and is about 70 years old according to Hubby, probably purchased not too many years after India first produced their own indigenous sewing machine in 1934. This one works by turning the wheel on the right with your hand while pushing the pedal to and fro with your feet. I remember how tiring that was when I was forced to take a home conomics class in my old grade school in Florida. 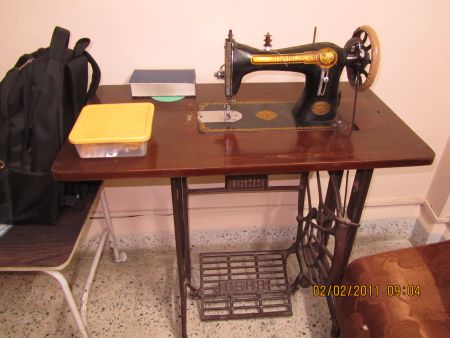 Shelves in the living room are filled with books, several of which were authored by Dr. Nagarajan himself. Imagine my surprise–and pride–when I spied my own there as well (the book with the red spiral binding in this stack). 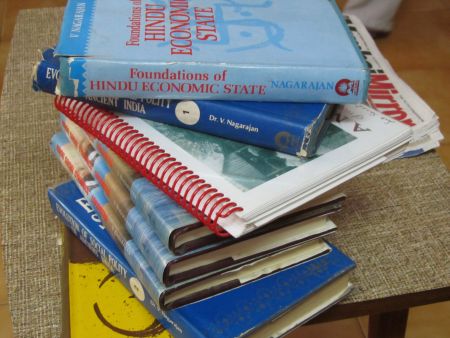 We made our way through several cups of tea and coffee and other treats Saradi had kept in store for us in short time. We spend a couple or more hours in the local Orthopedic clinic to check my thigh that was still quite bothersome and happy after the x-rays when Doc assures us there’s nothing more serious than hemotoma and that all that’s needed is a few days of rest. After lunch we take the car and driver hired for the day to explore the old haunts of Nagpur. Our first stop led to a short hike around a quiet garden alongside a very large lake. (I wish I’d taken more and better notes because now I can’t remember what it was called.) Not far in, we felt we’d been catapulted into a lover’s lane rather than a public garden. 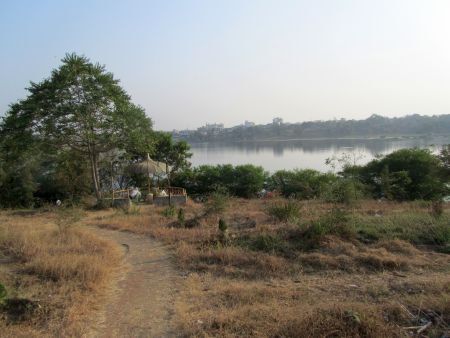 Imagine the chagrin of the two couples from the photo above, shown closeup here. They obviously thought they’d found the perfect hideaway from prying eyes until I showed up with camera in hand. The couple on the left pull a thin scarf to cover their heads, but the seemingly oblivious couple on the green bench behind the umbrella, backs to us, are pretty sure they’re safe. Oooooh, despicable me! 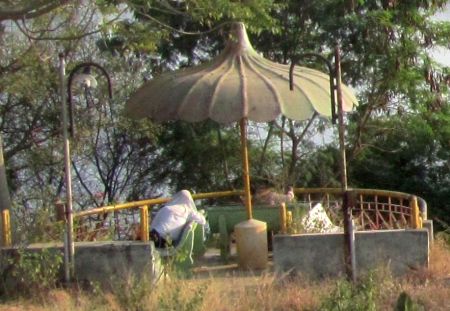 Hubby was really surprised to see so many college age men and women co-mingling along the path. That is not the India he remembered leaving behind 45 years ago. There were couples (some even smooching surreptitiously) everywhere.

We all wondered aloud if the parents of these students knew where their children were. Clearly, India today is not the India that Hubby remembers. Even Saradi was amused but still a bit taken aback at such public displays of affection. This behavior was unheard of during her college years.

Our tour continued with a search for the neighborhood where they had lived when they were young. Instead of the row of small bungalows they remembered, their old street was covered with a partially completed, several storied glass and aluminum shopping structure. It was hard to imagine what it had been like all those years ago. There’s the street corner where Dr. Gayaprasad’s practice had been–the building still standing where the family went when in need of medical treatment. They fondly recollected the doctor. In Hindi “Gaya” means gone and “Prasad” means blessings. They remembered that everytime they had to visit him, the doctor would jovially remind them that after he was born and given the name Gayaprasad, there were no blessings left. Funny, the memories of childhood that stay with you forever.

After I turned 25 or so, I began to realize the only constant in life is change. Various learned people have said so. Thomas Wolf reminded us of  it when he wrote You Can’t Go Home Again, and Greek philosopher Heralitus (c 535 BC-475 BC) when he said you cannot step twice into the same river, for other waters are continually flowing on. But I maintain that–for some of us–the only human begging routinely for change is a wet baby.

We did find another neighborhood nearby reminiscent of the old one, at least close enough that Hubby was quick to point it out to me. Even though the light of day was fast fading, I snapped a picture. With a bit of photoshopping, I could see a row of bungalows behind a shopping district with restaurants and clubs…unlit streets…young people milling about. I tried to imagine a little boy around 10 playing in the unlit streets with his three older brothers and the neighborhood gang of boys whose fathers could be heard cursing them for not being at home studying. By reputation, only Hubby and his three older brothers could afford to ignore their studies for play because they were all No. 1 in their classes, thus had no need to study.

No visit to a new city can be complete, of course, until we’ve had a meal in a fancy restaurant, even though Hubby pointed out I’d posted enough food pictures already. We ate in what appeared to be a restaurant popular with the locals. Dr. Nagarajan ordered family sized portions of some of our favorites shown here on my plate, left to right clockwise from 11 o’clock position, spinach saag, bhindi (okra–sometimes called “lady’s fingers” in India) masala, a curry of mixed vegetables, and dal. On the table are slices of raw onion and a flat Indian bread. 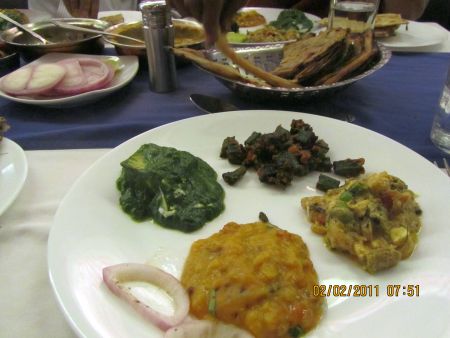 The restaurant’s decor was quite unlike that of the typical Indian restaurant in the U.S. This one featured artfully arranged, three dimensional thread spools on a quilted background of dark blue fabric. 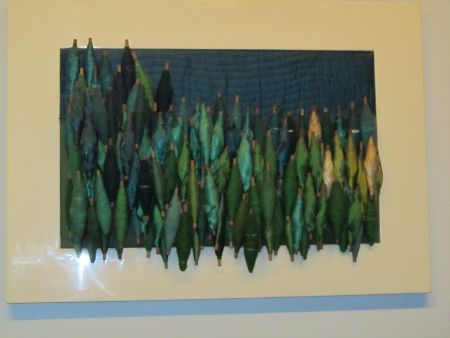 Sculptured birds in flight above narrow fabric covered pastel panels create a colorful backdrop that suggest to me lakes, mountains, and other natural vistas. 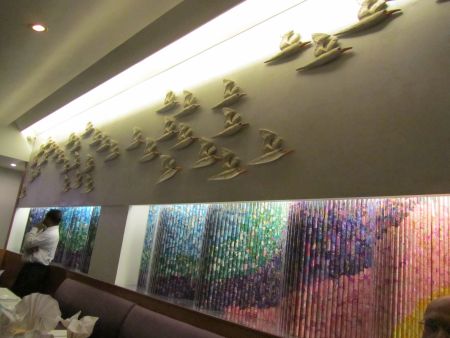 Outside as we were looking for our car and driver, Dr. Nagarajan pointed at the theater across the street. He mentioned that he and his wife had often had dinner in the same restaurant and attended movies when they were younger.

I hadn’t seen them for several years, the last time being around 1995. I remembered Dr. N was feted a year ago with a celebration of his 80th birthday. Saradi, in her 70s, was several years younger. Measuring them in terms of my own aging, I expected to find an old, frail couple. For that reason we limited our visit to only an overnight stay. What we found instead was a couple with seemingly limitless energy and enthusiasm for life. While Dr. N and myself were less willing or able to scout about on foot, Saradi almost put all of us to shame during our shopping expeditions of the day to find the perfect gold earrings as a gift for me (I wear them nearly all the time now) and a stylish Indian Kurta (off-white with gold trim) for Hubby. When we left to return to Bombay early the next morning, we were wishing that we had been able to extend our stay a bit longer so we could have spent more time with them.