Originally I planned to squeeze our one night sojourn to Thirvananthapuram, (which is the capital city of Kerala) into a general synopsis of the last couple days of our India tour. As I actually sat down to go over my notes and photographs, I changed my mind. When I first saw Thirvananthapuram on our itinerary, I had assumed–because it’s such an old city–that it might be something like Calcutta or Madras, crowded and/or hot and dirty (in my eyes at least). I’ve since learned, in fact, that Mahatma Gandhi referred to it as the evergreen city of India because of its rolling coastal terrain. I quite agree. It turned out to be one of the most impressive cities I’ve visited in India, and is a major academic hub. (I’ve always favored university towns!) I was very pleasantly surprised, to say the least. It definitely deserves a post of its own.

First, a note on the name. I wonder if others, like me, feel your eyes skim over every time you come across a word with 17 letters like T-h-i-r-u-v-a-n-a-n-t-h-a-p-u-r-a-m (which is a Malayalam word that means “abode of Lord Ananta). I’ve decided that Indian tongues are, by design, far more flexible than mine!  To me it’s easily a seven-syllable word, and takes me at least 10 seconds to pronounce. When I write it, I have to go back at least three times to see if I’ve put in enough “a’s”. On the contrary, most Indians can say it in four syllables or less and quite fast at that. I gather that when the British were there, they had similar problems with all those vowels, so seeing as how they were in charge of such things for awhile, they anglicized many of those names. Thus Thirvananthapuram became the three syllable word, Trivandrum, which I find not only easier to pronounce, but easier to spell as well. Officially, it’s now back to the old spelling, but I did notice most of the locals still use Trivandrum as I do.

This is the administrative building of the University of Kerala located on Mahatma Gandhi Road across from our hotel.

Here are a couple of typical streets in Trivandrum, the top one looking similar to the area where our hotel was located. I’m not sure of the street name here, but our hotel was on the Mahatma Gandhi Road, a major north-south road running through University of Kerala area, on which several colonial period mansions stand. The next street is more typical of the commercial district.

Of course there was a Hindu temple on our agenda and auto rickshaws are a cheap way to get about the city. According to protocol they should cost only 10/15Rs per kilometer. Hubby’s brother cautioned us to insist on using the meter, but indicated he thought the rickshaw drivers in Trivandrum were among the most honest in all of India, but we shouldn’t pay more than 20Rs. We found a driver in front of the hotel, and he delivered us to the temple, then demanded 30Rs. The meter had shown 10Rs all the way. Naturally Hubby protested, the driver insisted the meter was broken, and Hubby handed over the money anyway. (I suspect meters are always broken for tourists.)

This is the Sri Padmanabhaswamy Temple. Before arriving, I knew only that it was very old and as such was an outstanding example of ancient south Indian architecture. It had the usual crowds of Hindus making pilgrimages to this famous temple dedicated to Hindu Lord Vishnu. Authorities were very strict there, however. Only Hindus are allowed inside and must follow stringent rules of dress. Men have to take off their shirts and wear only dhotis (see photograph), and women cannot enter in salwar kameez or pants–only saris. Also, we were told that hubby and I will have to go as a couple.  It was a moot point as  “Only Hindus” left ML and me out. I only remember being refused entry to a place one other time–that time an Indian restaurant in Washington, D.C. in the late 1960s, that time because I had on slacks. It made me feel awful as I was still fresh from the south. It hit me then how black Americans must have felt not being allowed to use restaurants or other facilities when I was growing up. Which made me feel even worse. Hubby, bless his heart, elected to stay with us and protect us from vendors and curious devotees. So we stayed outside and went as close as we could to take photos, then did what women do to feel better, we went window shopping along the entry. I understand that the inside of the temple is quite beautiful with scenes from Ramayana as well as eye catching sculptures and musical pillars, but only Hindus will ever know for sure.

To get back to the hotel, we went in search of an honest auto rickshaw driver. When learning our destination, which was probably less than a mile away by this time, the drivers all quoted the same rate of 30Rs as we’d paid on the trip in. I can’t remember how many inquiries we made before Hubby, determined to find that legendary “honest” auto rickshaw driver in Trivandrum. The difference in 20Rs and 30Rs is–in U.S. dollars– is around 25¢ US, nothing that would break the bank, but for Hubby it was not the money, it was the principle! Finally we found one! One young man, barely out of his teens, offered to take us for 20Rs! At my first opportunity, while the driver was looking for a new rickshaw (stay tuned and you’ll understand) I took this picture of his rickshaw cab. I don’t know what I expected the cab of an honest driver to look like. As a Christian myself, perhaps a plastic Jesus or Mary? Reconsidering the issue now, I think only a sweet and honest young man would even think of displaying flowers, albeit silk ones. I was very touched.

The traffic was very busy that time of evening. We got about half-way back to the hotel when the rickshaw stalled in the middle of a busy intersection. Try as he might, this poor young guy couldn’t get it to start again. Out of gas! Somehow he managed to get it over to the side of the road, where he would help us find another driver to take us the rest of the way. I was feeling so sorry for the young driver, who refused to take any payment. I leaned over to Hubby and suggested we give him at least part of the fare, which he did since he’d had the same thought himself. Still the young man refused to accept payment. We changed cabs, and just as we pulled out again–with a new driver–Hubby asked the fare for the short ride and was told 30Rs, which of course he refused and we pulled over and got out of the vehicle. Long story short, we accepted an offer from still another driver of 20Rs to take us the rest of the way. It was only about a half mile or less, but my leg was aching so we accepted it. I still worry about that thin, hard-working young man I now consider perhaps the most honest auto rickshaw driver in Trivandrum.

One last beach on our agenda, this one the Kovalam Beach, has rocky picturesque outcroppings as well as shallow water for swimming. The surrounding hills are lined with palm trees and have lots of shops that we had no time to explore. In fact we spent very little time here. We were glad to have had the opportunity–Raj and Vasanti particularly as they hadn’t been there in 40 years–but by that time my leg injury (in Goa) was really becoming bothersome and I was loath to keep on trying to walk in sinking beach sand. The young men in this picture featuring only one are wearing beach Lungis. Similar to the dhoti most commonly made of thin white cotton, the lungi is made of bright colors or decorated with colorful patterns and worn long or short. 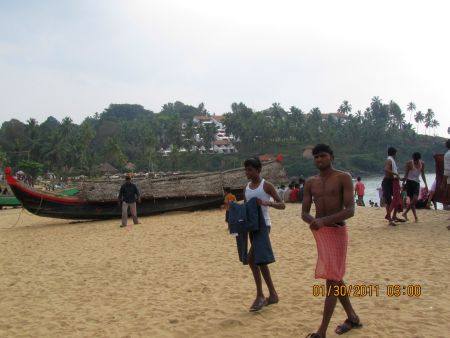 In the southeastern U.S., where I grew up, we like to think of ourselves as among the most hospitable of the country. That was the example I was given as a child, and it was largely correct, except there were unspoken caveats (such as being the right color, the right religion, and various other things). One of the things I love about the Indian culture–and I can only speak to my experience–is that it doesn’t matter who or what you are, if you’re a guest in their country, you will be treated with a generosity of spirit I’ve never seen equaled anywhere. I’m convinced that’s probably the reason they were occupied historically by so many other more aggressive cultures.

A good example: When we knew we would be in Trivandrum, we planned a short visit to meet the parents of one Hubby’s niece’s husband Anand who lives in California. As it turned out, we arrived and checked into our hotel rather late in the day, all of us–particularly me–very tired so we decided to call Anand’s parents with our apologies. It was decided that they would visit us at our hotel instead. Gift giving seems to be customary in India for they showed up bearing gifts, among which were these red bananas (specialty of the area)  and an aromatic flower garland. They were not only very nice, well-traveled people, but very pleasant conversationalists as well. If I’m ever in their lovely city again, I’ll make certain to carve out more time to include a visit to their home.

At the Trivandrum airport the next day we said goodbye to Raj and Vasanti. With our friend ML, who would be leaving India in a couple of days, we took a flight to Bombay where we were collected by Hubby’s nephew, Raghu. After a family dinner it was hasta la vista to ML who was staying the night at a hotel near the airport. We had become so accustomed to her being around, and it had been enjoyable sharing India with an old friend. We missed her. Personally I was looking forward to some “down time” to let my leg injury heal. Although we didn’t know it at the time, that Bombay stay would lead to many more memorable places and things and people. New adventures awaited. Next stop will feature a family visit in Nagpur.