The Mudra Daily Kathakali Centre, located in Kottayam within walking distance of where we were staying, offered two different shows daily. One was a program of Martial Arts called Kalaripayattu, the other was a Kathakali dance program. Kathakali is the classical dance form that originated in Kerala in the first half of 17th century AD. Epic stories like Ramayana, Mahabharatha, and Bhagavatha are acted out in Kathakali performances. I’m not so keen on fighting–even in the name of art–so I voted to see the dance. From the age of 10 or 12, Kathakali artists undergo six years of rigorous training. Not only is the dance colorful, but the makeup and costumes are quite striking and are equally important as the movement.

Well before nightfall, we left the resort compound on foot to walk along narrow roads accommodating not just walkers, but animals and vehicles of all types from two-wheelers to tourist vans. We really didn’t know where we were going though we had vague instructions from reception staff at the hotel. The walk wasn’t too far–less than a mile I think–and it offered a glimpse of the afternoon routines of the lives of locals.

The story presented that evening focused on Narakasura, an evil demon, drunk with power. He felt to be unrivalled in prowess, so he brought all the kingdoms on earth under his control. Soon Narakasura had become the overlord of both the heavens and earth and his reign of oppression was in full swing. Addicted to power, he abducted 16,100 women and imprisoned them in his palace. The characters are a little complicated, so this interpretation may not be strictly accurate. This young man played maid-servant Nakrathundi who will go into heaven for her master to abduct more beauties for his harem. Part of the allure for me was the two actors transforming themselves into their characters. 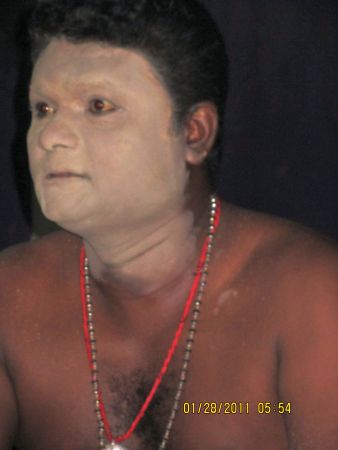 The young man with the green paint on his face will be playing Jayantha, the son of Lord Indra. 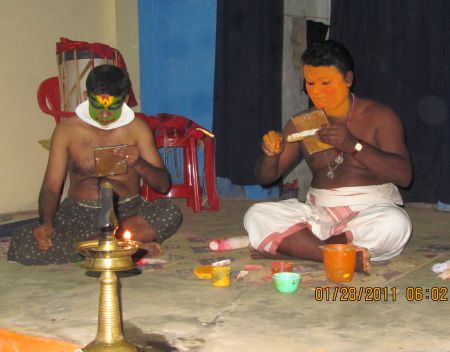 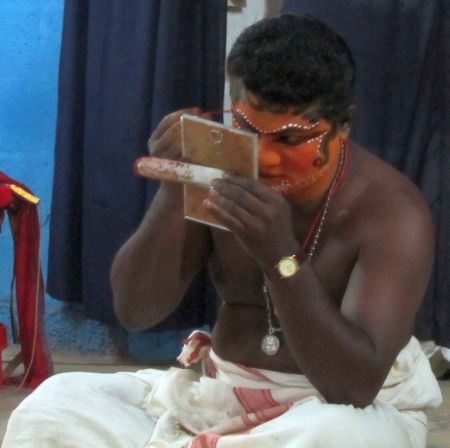 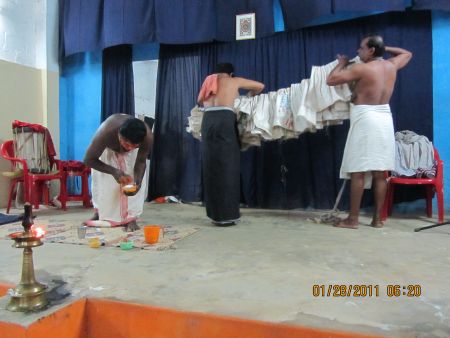 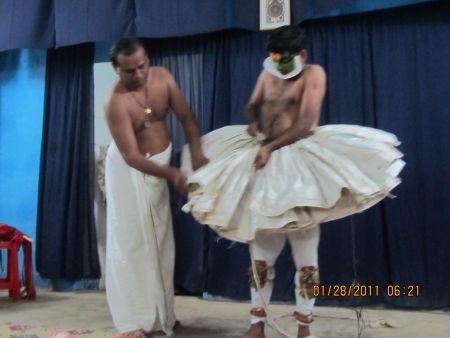 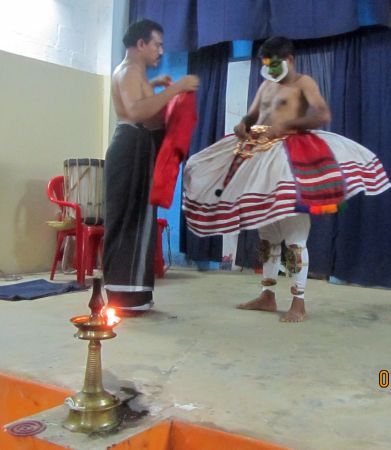 Below is the narrator of our story, which is Murder of Narakasura. (Also, he’s assisting the character in the above picture). He added to the beat and rhythm with the symbol type percussion in his hand. The only other performer is the tabla player you’ll notice in some of the pictures of Jayantha.   (I should mention that the only accompaniment is the steady beat of the tabla to add drama to the description given by the narrator. The hand gestures and the facial expressions are the most important components of the story. There is no dialogue, but I have taken the liberty of translating the story into the southern American idiom a la Andy Griffith. Hopefully I’ll be forgiven by my Hindu friends and family.) 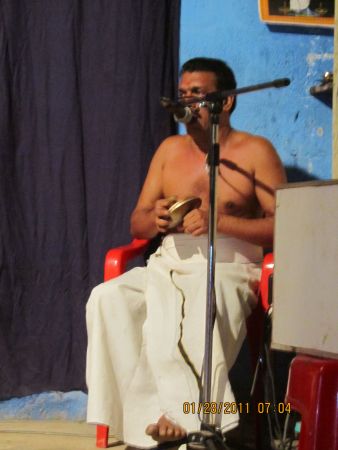 Here the beautiful Lalitha that Nakrathundi has transformed herself into. She arrives in heaven and as soon as she sees Jayantha, the son of Lord Indra, for the first time, she completely forgets she’s supposed to capture beautiful women for her master. Jayantha is likewise smitten with Lalitha. Oh, you are so beautiful! he says. But who are you? Why have you come here? 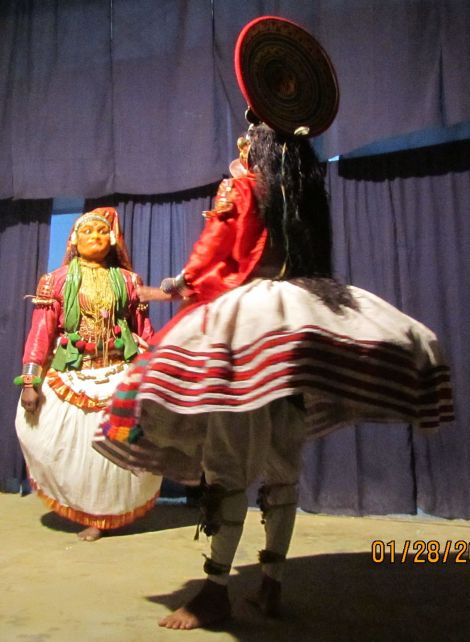 In the coyest of voices, Lalitha purrs, I belong to your Heavenly kingdom. I fell in love with you the moment I saw you. Please accept the love I offer you, and tell me that you desire me. What she wasn’t saying–out loud at least–was whatever Lalitha wants, Lalitha always gets! as she was used to getting her way. 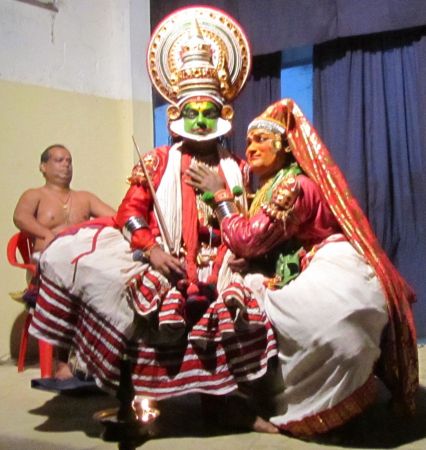 But Jayantha, a good boy at heart despite his sexual appetite–which he undoubtedly learned from his father–says, No! I cannot marry you without my father’s permission. Please wait until I have told him about you, and he can see you for himself. 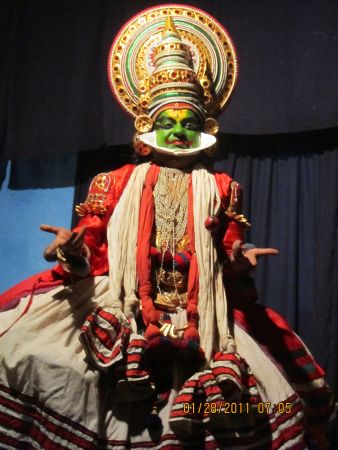 Now Lalitha had been around the block a few times, and she knew that Jayantha’s father, the Lord Indra, would probably be able to see right through her disguise, so she answered Oh no! I cannot wait. I want you now! Come here and hold me in your arms. Stay here with me always. I want to be with you. Then, appealing to his baser self, she added,  I want to make love to you. But as we already know, Jayantha was a good boy so we’re not surprised when he answers rather sharply. Your words are like sharp arrows flying into my ears. Get away from me, you vile creature! You’ll soon see what’s coming to you! Nakrathundi, who wasn’t used to being rebuffed like that, immediately changes back into her mean self and begins to attack Jayantha. 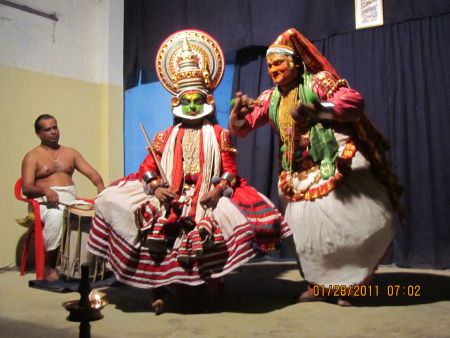 As we know, everybody has a breaking point some time or other and Jayanthan finally had reached his. You wretched devil! he says to Nakrathundi/Lalitha, shaking himself free of her. You dare to bring your demonic practices into Heaven. You dare you commit your foul deeds in our heavenly kingdom. Why, why . . . I’ll show you! 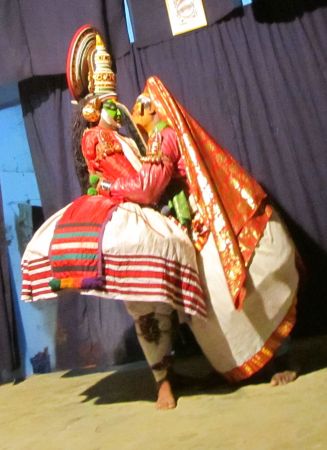 You fool! said Nakrathundi.  I am one of the great Nakrakasura’s demons. He is our mighty Lord. 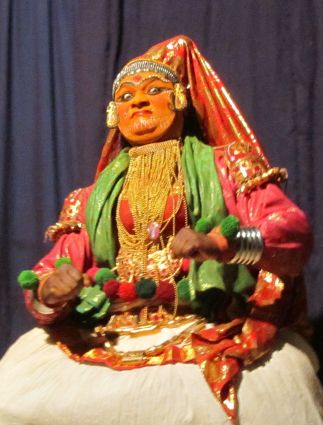 But Jayantha was not afraid because he’d remembered to bring his sword with him and he knew how to use it. You have treacherously entered our heavenly kingdom and seized our beautiful maidens. For those crimes I’ll cut off your nose, ears and breasts!Jayanthan attacks Nakrathundi, who thus wounded, flees screaming back to Narakasura in the underworld. 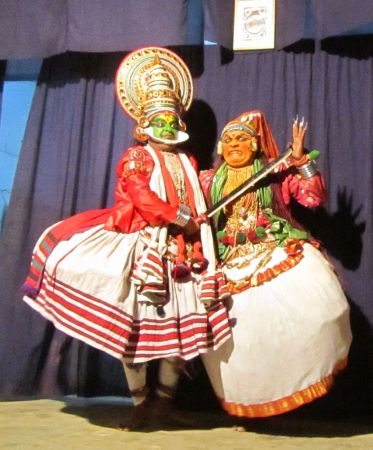 I will spare you the final grisly photograph of an earless, armless, breastless Nakrathundi/Lalitha to end here. Suffice it to say that, like a good boy, Jayatha then goes off to find his father to report to him the whole episode.

What I wish I could show you, but these digital pictures just can’t do it, is the drama in the actors’ faces, particular the actor who played Nakrathundi/Lalitha. Using only his facial muscles to emote, his cheeks and lips literally quivered while you could see his eyes practically snapping with fire. No wonder when the performance was finished, and Nakrathundi motioned to me to come onstage, I was at first taken aback. I hesitated. Wasn’t sure what she/he had in mind for me. I nearly waited too long, but did just in time to take a quick bow with them and Hubby. 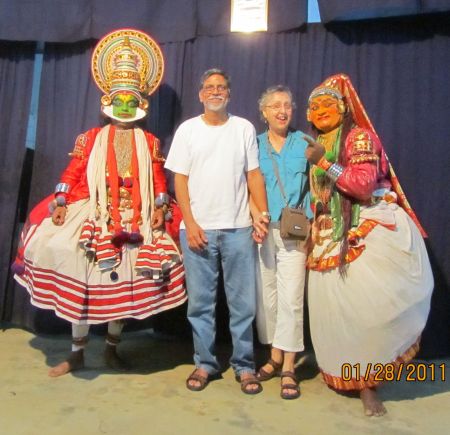 Before the show started, mosquitoes had begun to make their presence known both in and out of the theatre. Screens are very scarce all over India. I could hear them buzzing although I have a peculiar condition in that mosquitoes will land on my arm sometimes, but they rarely bite me. I can count on one hand the number of mosquito bites I’ve had. Hubby and ML, on the other hand, were feeling very vulnerable because we’d forgotten to take our insect repellant with us and we had to walk back to the hotel. Hubby never meets a stranger, and he doesn’t mind asking for whatever he needs if he sees someone else has it. The only other audience members, four Indian expats visiting from Canada and the U.S. had some. They were good friends of one of the actors. Soon they were our new best friends and gave us some of their spray. Just to be on the safe side, I sprayed myself too. You never know for sure about those foreign mosquitoes! After the show, despite being our new best friends, they drove away without offering us a ride. With only the occasional light of an auto driving through, we followed our noses back to the hotel trying not to think what might be lurking there in the dark. I made sure to walk in the tracks of the person in front of me. That way if there was a drainage ditch or some other cavernous hole lurking in the dark, I’d have someone soft to land on!