We finally arrived around noon to our new home for the next few days and disembarked on the lakeside of the Lakesong Resort, a beautiful retreat with a private canal that allows you to reach the reception desk by boat. Since we had been on the lake for two days, we chose to try out our land legs by walking to reception. We strolled along the pathways of a luscious green lawn bordered by Lake Vembanad, that took us past palm trees and fresh water lagoons. Besides Bird Sanctuaries and Ayurveda Treatments, the region is famous for Snake Boat and other boat races at festivals during monsoon season in June and July.

Flowers were everywhere, many of them more familiar to me as houseplants. Here at Lakesong they formed large shrubs and bushes–so naturally it took me twice as long to get to registration as the others since I was lollygagging photographing as many flowers as I could.

The resort offers boating, canoeing and fishing facilities. As we passed through the canals, I knew Hubby was already envisioning a boat ride.

And I was right! Only two people were allowed on the boats at one time. Since my legs were still a little wobbly and wishing to avoid yet another accident–I was sure I’d fall in stepping down into the canoe–I insisted ML go while I stayed on the path and took pictures.

As much as I enjoyed all the specially prepared Indian food on the houseboat, by this time I was beginning to long for plain old non-spicy American food. ML and I both longed to have a fresh vegetable salad and ice in our water again. A grilled cheese sandwich and fries fit the bill very nicely. I even ate the raw veggies and ice in spite of being warned not to (not that things were suspect in any way, but different bacteria in water country to country can lead to “Delhi Belly”).  No harm came of it after all. 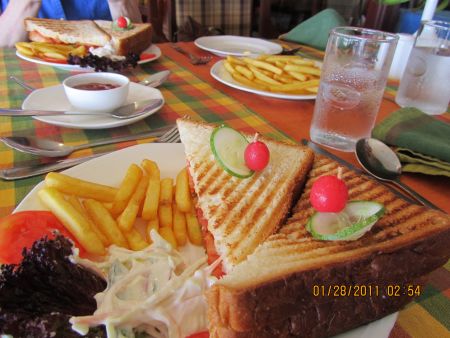 The resort can arrange site seeing trips to nearby places like Kochi, or the Periyar Sanctuary for a chance to see Elephants and Bison in a protected area. There’s also a swimming pool and children’s play area here where Hubby worked off some calories.

“I’ll do it if you will” said ML. Neither of us had ever had a massage before, and I probably wouldn’t have indulged myself had it not been for ML’s dare, so we stopped by the hotel’s spa for an appointment and got one for an hour or so later. We looked over the menu, and chose the “cooling salad” massage, said to cool and refresh you and take away the tiredness because we wouldn’t be there long enough for the “proper” Ayurvedic treatment. There’s probably an Ayurveda program for most anything that ails you, and it’s rare to come across a hotel or resort that doesn’t offer at least an Ayurvedic massage. Some places, however, are more serious in their treatments than those that cater to tourists who simply want to experience Ayurveda as we did. It cost us about $35 dollars US each, which seemed a tad expensive even on my American budget but still cheaper than in the US. Later we learned that natives can get the same service for half that price. Ouch! When we arrived for our appointment, we were led to separate rooms by our young female masseurs.

Inside my private little alcove, I disrobed to the altogether while the attendant fitted a loin-cloth between my legs and tied it around my waist. I looked a lot like Mowgli, the young orphan boy who was raised in the jungle by wolves in Disney’s movie, JUNGLE BOOK. Then it was time to climb on a narrow metal table and lie flat on my stomach. There was a relaxing little chant playing on a CD player. Meanwhile, I was wagering what the girl must have been thinking about the bruise from my fall in Goa. I’ll bet she took one look at the huge purple/black bruise along my entire right thigh and immediately thought I was a battered wife. She was the consummate professional and no matter what she may have thought, she said nothing and was especially gentle working on that section. The “cool salad” seemed to be a mixture of cucumber and herbs, maybe a little oil, pulverized into a mixture that felt like a milky yogurt bath. She went to work spreading and massaging it over every inch of my body–from the top of my head, down the neck and back and legs to the tips of my soles. When she was finished with that side, she asked me in sign language mixed with some English words to “roll over” on my back. I felt so slick and the table was narrow enough that I was afraid I’d slide off, but with her expert assistance I manage to flip. Then she went to work on that side, again beginning at the top of my head and working her way slowly all the way down to the tips of my toes. The whole thing took nearly an hour and when she was finished, I smelled like a cucumber salad.

At this point, I slid off the table and she untied my loin cloth and pointed to a shower at the end of the room. Just as I was wondering whether I was supposed to shower myself, or wait for her, she came over and started with my hair, pouring soap in and washing everything again–top of the head to the tip of my tippy toes. Later, ML and I compared notes, and learned our experiences were pretty much the same. As I began to write this report, I decided to ask her to refresh my memory. Had her massage included the front, too? Here’s her answer: “Oh, yes, she did.  The only untouched body part was my woohoo, and you can quote me on that!”

We walked out feeling so good, so cool and refreshed we thought it would be nice to have a massage like that much more often! There was so much to show you here that I couldn’t possibly fit everything in. Rather than slow down loading time significantly, I decided to make a slide show of the resort for anyone interested in oogling the flowers in the resort. You can see all 17 pictures of that slideshow here if you wish. If you want to look closer, click the pause button or hover your mouse over each picture. (Click browser’s back button to return here.)

There were various cultural programs organized for entertainment in the nearby village, so evenings weren’t dull either. Coming up, we’ll explore the resort grounds together and I’ll tell you about the Kathakali dance we attended along with trillions of mosquitoes and the new friends we met who had bug spray on hand. Hope you’ll join me.

10 thoughts on “another tropical paradise”