We were only in Kochi (Cochin) overnight and most of one day, but somehow it stands out in my mind as one of the more interesting cities we visited. Since we arrived in the night, we became aware of our surroundings only in the light of morning a few hours later. In spite of its name, the hotel was both quiet and  pleasant despite being a very old building currently undergoing massive renovations. The food was pretty good too.

Legend has it that Jews have been in India since the time of King Solomon, when Jewish merchants established trade for precious gems, gold, spices and fragrances with India. They first settled in Cranganore on the coast of Malabar, during the 4th century A.D. when they were welcomed by the Cranganorian King. India has consistently and historically tolerated all other religions, and have a saying that translates to “The truth is One, though different Sages call it by Different Names.” He not only welcomed the Jews but presented them a tablet engraved with his permission to Jews to live freely and build a synagogue. Though the majority emigrated to Israel around 1948, the few that remain there look much like other Indians. They speak an Indian language, were obviously influenced by the Indian culture, yet maintained a separate existence from the Indian groups in the area.

At the end of this street, appropriately called Jew Street, is the Synagogue. It was orginally built in 1568, partially destroyed in 1632, and later rebuilt by the Dutch. The clock tower was added in the mid 18th century, and underwent repair work between 1998 and 1999. It’s the only synagogue in Kochi still in use today. The pretty young woman with the bag on her arm is Hubby’s niece who had taken an all-night bus from where she lives in Bangalore to join us for what would turn out to be a few hours visit. She would take the bus back to Bangalore at the end of the day. Imagine two all-nighter’s on the bus in order to see her Uncle and Auntie–mom and dad, too, of course–for only a few hours. That’s devotion to family!

Photographing is not permitted inside the synagogue, so I’m relying once again on Wikipedia Creative License to display this one of the entrance. Apparently, this was not always a rule, or maybe some people ignore the rules. Either way, I’m happy to have found this one that shows up the opulence of the synagogue’s interior. Notable in this picture are the Belgian glass chandeliers, the brass-railed pulpit, and the floor composed of hundreds of Chinese, 18th century, hand-painted porcelain tiles, no two of which are exactly alike. 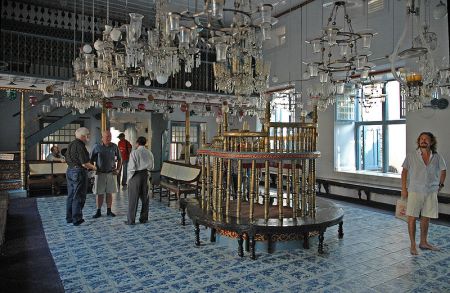 It was somewhere here, possibly among the historic relics throughout the building, or more likely the Mantancherry Palace that adjoins it, that I saw another stunning display of a different way of wearing the traditional Sari. Inside a glass case, a mannequin was dressed in a very individualistic style of the Indian Sari. I wished at the spot that I was an artist because I so wanted to remember it, so I was forced to take a mental snapshot. It was white and instead of the pulao wrapped upward and over the shoulder to cover a short blouse, it was instead wrapped around the upper portion of the chest to form a strapless dress, so simple yet so stunning. It was during my failure to turn up reference to it anywhere on the internet that I chanced instead on this video on YouTube. Regretfully it begins a bit commercially, but if you can advance or suffer through the slow beginning, this video (click here) affords a virtual visit–not just to Jewtown–but to portions of the synagogue as well.

The remaining pictures are of various eye catchers along Jew Street on the way to and from the temple. The embroidery shop (green-painted wall) is run by one of the last surviving members of the community. Many of Kochi’s Jews emigrated to Israel, some converted, but as far as I can tell, only four families remain.

Hopefully, clicking on this one (below) will enlarge it sufficiently in case you find it difficult or wish to read.

What a mix of origin flavors: Indian? Jewish? or Dutch? (I refer to the wooden feet in the right foreground of the picture of course. What’s that? The Dutch wore wooden shoes, not feet? Oh well!)

And what an eclectic mix of colors! Orange with pink embroidery would never work for most Americans. Yet it looks sumptuous in India.

My favorite! Quilts and elephants together. 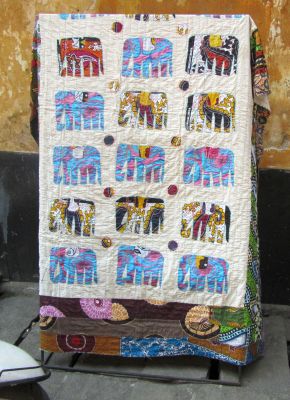 Next from Cochin, we’ll have a look at the Chinese fishing pier. Hope to see you there.

12 thoughts on “a visit to Jewtown in Cochin”