Now that you know all that’s important to know about Goa from my previous Goa post, I can just relax and show you what I came away thinking of as the beach scene in Goa. All in all, we visited four different beaches (only 3 represented here), each with its own special vibes. All were considered fishing beaches, some cleaner than others, and some that felt much more local than those with obvious hordes of visitors from all over the world, particularly Russia.  It was even more difficult than usual to cull down the hundreds of pictures I took and  choose a few to represent them, but here goes a valiant attempt.

In addition to the activities reflected in the previous Goa post, we begin with two more of Calangute Beach near our hotel. There were many, who appeared to be locals, gathered here with only a sprinkling of western visitors. People were actively pursuing various water sports and other activities, but I noticed relatively few actually ventured into the water. Whenever they did, they were still in their clothing–particularly the women–rather than bikinis or even modest bathing outfits. From here, the pictures should mostly speak for themselves.

Moving on to Miramar Beach (also known as Panaji Beach). 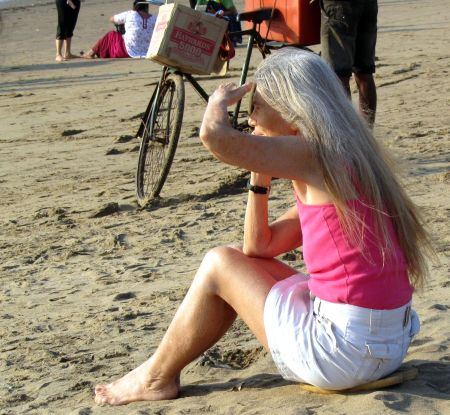 There was a Coast Guard open beach volleyball tournament going on at the time.

Finally we reach Palilem Beach near the southern tip of Goa (turned out to be a long drive because of the roads and traffic). This one turned out to be my favorite, I admit, probably because I saw many people here who looked more like me (pasty white skin). The beaches were clean, and there were lots of rocky places to climb without being an athlete, and wonderful beach shacks featuring local food, huts with palm trees growing through the roofs. We ate dinner at one of them and had coffee in another. I ordered fresh catch Tiger Prawns, so big I only ordered two along with a plate of shared appetizers, for dinner. I was totally stuffed! after I had dessert of course. There so much life on this beach shared by people and animals alike. 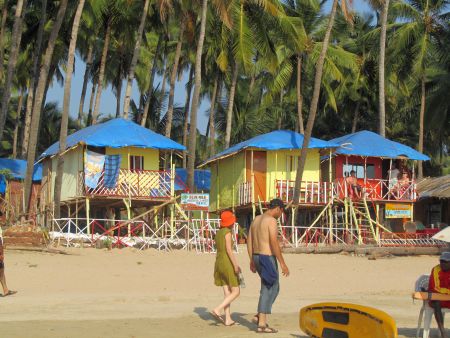 Somewhere about this point in time, Hubby and I shared a Déjà vu moment. Perhaps some of you will remember seeing this old picture from a previous post (Time Stalkers and Other Sunday Memories) dated October 18, 2009. Hubby took it in 1968 when we were visiting Daytona Beach together. (For those of you unfamiliar with Florida beaches, be sure to notice the white sand. Now compare it to the sand colors in the previous pictures. No comparison! This is truly one of the best beaches in the world!)

We almost simultaneously saw the comparison. They aged–just as we did!

Lest there are a few men out there among you bemused by this phenomenon, let me bring you back to reality by drawing your attention to this bather. Note that he doesn’t even have the excuse of middle-aged spread. What do you think? Thirties perhaps?

I understand from people “in the know” about Goan beaches, this place “comes alive” after sundown. Alas, our timetable wouldn’t permit our staying much beyond another luscious sunset . . . 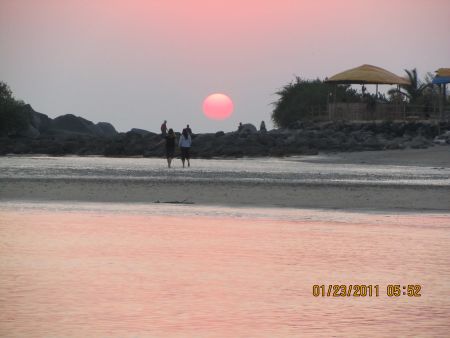 before we located our driver, Joseph, and gathered our tired bones into the van to be driven back to Casa de Goa, arriving rather late but safe and sound.  Thank heavens none of had to stay alert to drive! In the next Goa posting, we’ll check out the shopping scene in Goa. ‘Hope you’ll come along.

4 thoughts on “the beach scene in Goa”