After Anna and Babloo saw us off at the airport in Delhi, we arrived in Goa early the afternoon of January 21. Goa is renowned for its beautiful beaches and places of worship. In somewhat of a minor miracle, Hubby’s brother and his wife, Raj and Vasanthi, showed up to welcome us at the airport. They joined us in Goa and continued on with us to cruise the backwaters of Kerala and points further south.

Goa is located on India’s western coast along the Arabian Sea, roughly south of Mumbai (Bombay) and just northward of Bangalore. I’ve seen some of the most incredible sunsets imaginable along the Arabian Sea. (You’ll see some examples in some of the next few posts.)  The Portuguese occupied and colonized the territory for about 450 years, until its annexation by India in 1961. It was here that I felt the distinct blend of the two dominant religions–Hinduism (65%) and Christianity (30%) with Islam (3%) and Sikhs and others at 2% making up the rest. It was clear from the number of Catholic churches we visited the next day that this part of Goa was heavily Christian.

This is our handsome driver during our stay in Goa. Joseph’s good looks and personal demeanor soon began to epitomize for me the easy going, relaxed nature of the Goan people with whom I came in contact. (Click on his picture to enlarge it, though I’m very sorry you won’t be able to see his beautiful hazel eyes!) Joseph loaded us all into a large enough van to accommodate all five of us plus all our luggage.

Unlike other areas of India I’ve visited over the years, everyone here in Goa, including hordes of foreigners from all over, seems free to follow the lifestyle they wish, including religious views and dress codes (You’ll understand that line later as you see some of the beach pictures.)

Here’s the front of our hotel, the Casa de Goa, which turned out to be about a block away from the Calangute Beach–and only about a 45 minute scenic ride from the airport in the capital city of Panaji. Across the street, on the beach side, the hotel grounds continued with a large number of cottages for rent. While we were being checked in, we were served a refreshing drink made with pineapple–if memory serves–that put me in mind of Hawaii. After four cool days in Delhi, we were beginning to feel as though we were on holiday in a setting almost like my imagined paradise. 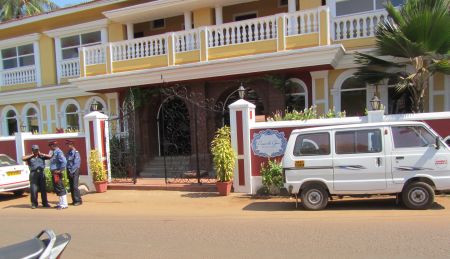 Here’s a nice touch I was to discover in most if not all the hotels we stayed in all over India. Cheerful welcoming flower arrangements were located at the entryway, and changed nearly every day, a very nice touch!

It also felt very much like a Florida hotel in both color scheme and open design. Even indoors there, you felt as if you were part of the outdoors. Here, in front of a painted tile display by a Goan born artist, Mario de Miranda, Hubby takes an Ibuprofen break on the lobby bench after check in. Although the ride wasn’t terribly long by Indian standards, the roads are sometimes (nearly always) very bumpy so it’s good to have plenty of pain relievers on hand. 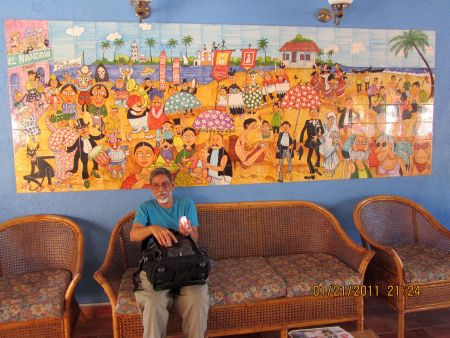 Our rooms overlooked the hotel swimming pool where a buffet dinner and cocktails were served poolside each evening. On the rooftop to left are solar panels that ML learned the hard way (a late night shower) to heat water. As long as you showered earlier rather than later, the solar power worked very well. When and if you complained at the front desk about the lack of hot water they would look at you like something was wrong with you.

Because we don’t want to miss the quickly approaching sunset, we’ll go to the first of our Goan beach destinations now. Calangute Beach is supposed to be the busiest beach in Goa, reputedly a favorite of the hippies during the 1970s and 1980s. Across the street from our hotel along this dirt lane, we could walk to the beach.

Growing up in Florida as I did, near enough to the white sands of Daytona Beach on the Atlantic Ocean to go there often as a teenager, the beach itself was not quite as impressive as I had thought. It became apparent pretty quickly, however, that there’s plenty to do there . . . if you have the stamina, are young enough, or just plain foolish enough. For so late in the day, there were still huge numbers of visitors about indulging in various water sports activities or like us, just enjoying the ambiance.

Water skiing and para-sailing,such as you see in the picture below, begins in the afternoon when the wind begins to blow and continue well into the sunset.

While there are fishing boats about–Calangute is known as a fishing village after all–you could decide to fish the solitary way–like this man is doing.

Or you can just be lazy and lay claim to a wooden beach bed-bench with a thatched roof over your head . . . 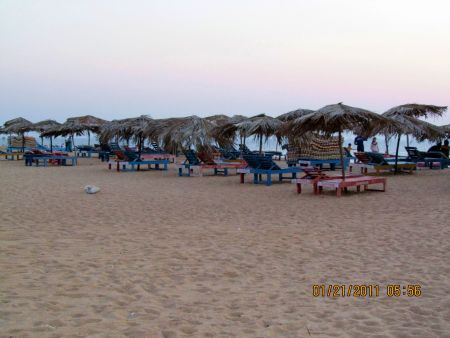 Or you could roll up your pants legs and stroll along the beach . . . like we decided to do . . . . I really like this picture of the four of us–myself, ML, Vasanti & Raj–with our shadows reflecting in the water . . .

while we we watched for the perfect moment to snap a picture of the sunset just as the sun dips into the sea . . .

We’ll continue next time with more of several Goan beaches as well as some of its other outrageous visitors.