How do you like the snow? On Wintersong I mean? Neat, huh? Enjoy it until sometime in January when it’ll disappear until next year-end. Thanks WordPress.

Every year I do the best I can not to get all caught up in the frenzy of the season. And I’m mostly good at it. The weather has been so severe the past couple of weeks, however, that we’ve been housebound for several days in a row, so when we do have some warm days (today around 42 high), both Hubby and I tend to have itchy feet. There’s plenty to do around the house but we just have to get out when we can. That’s making it difficult for me to continue to post pre-India trip reflections of my first visit there in 1980. That plus the fact I’ve misplaced (temporarily I’m sure) most of my physical photo files from that trip.

I’m still working on it when I can fit it in, and hope to finish my reflections on then and now, the reason being that I suspect things have changed a lot since then. In fact, probably since our last trip–at least mine–around 1997 when I already could see significant changes beginning. If Americans aren’t at least a little concerned that the U.S. is slipping big time in too many ways to count here, it’s because they don’t travel enough to see the changes themselves. Too many stubbornly cling to the America #1 myth without really understanding what made our country great in the first place. But that’s another story. Unlike a certain woman we know who is now the author of three books written in the space of about a year, I know that I don’t know enough about politics here or abroad to write about it, and certainly not to twit about it, but I’ll know what I see. That’s one reason I look forward all the more to seeing India again with new eyes, and hope to continue my reflections soon.

While I was grumbling about the snow and cold and stuff  and not being able to find the photos for my post on India, my friend ML sent us prints from some old ads which are too funny not to share.  So here is the digression to lighten the mood, old ads labeled “ads you’ll never see again.” For very good reasons.

My family were farmers when I was growing up in the deep south of the U.S. in the 1950s, and we produced most if not all the food we consumed. Besides our vegetables, that included growing our own beef, hogs, chickens or other fowl as well as the occasional deer or other wild animal in the woods where we lived, courtesy mostly of one of my brothers who liked hunting. We were poor but as I look back I realize we were pretty happy. I just didn’t realize why. 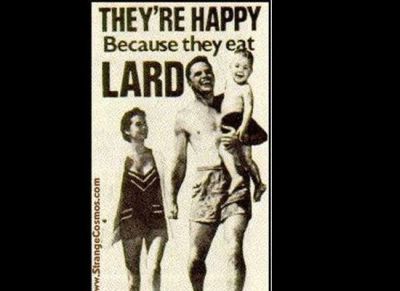 As you likely know already, lard is the fat rendered from the white fat of the abdomen of the hog. Among its attributes is that it fries up a delicious chicken out of the drippings of which come the richest gravy–better than the colonels even–and, though I prefer the taste of real butter in my pie pastry, lard makes far flakier ones. The reputation of many country cooks I knew were probably made by their regular use of lard. Food establishments have known it for a very long time–just as sex sells almost everything, fat and lots of it makes food taste good. I’m pretty sure many people where I grew up are still using lard today. Old habits and preferences die hard. What do you suppose we’re using today, that’s considered a healthier alternative, will we be ostracizing in 30 or 40 years.

And no wonder women growing up in those years had such a distorted sense of who they were.

This must be the reason I don’t look cute anymore. When Hubby retired, I did too. Sorta. These days I designate and we both work just a little bit to keep the house just clean enough it would fool the health inspector were he/she to drop by. 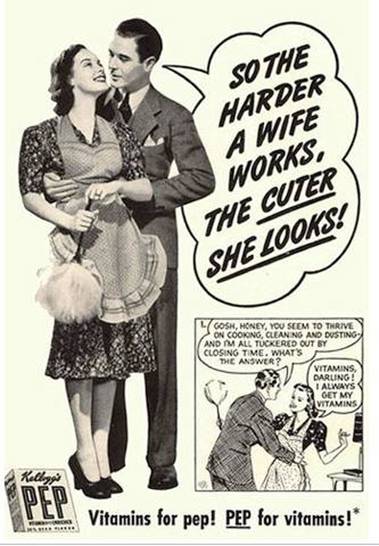 What about all those women you know with muddy skin. Heaven forbid. Not to mention pimples and blackheads!

But we all know the real culprit is fat, just as much now as it was the century this ad came out. Which more or less brings us full circle to the happy couple above who eat lard. 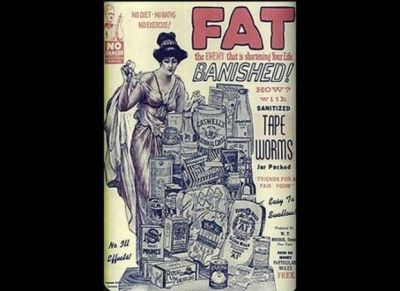 Once we banish all that fat with the sanitized tape worms, get the muddy skin all whitened, then we were ready to go out in the world and capture a man to take care of us, as long as we work hard keeping house for him of course. If we were real lucky, he would buy us stuff. To cook. ‘Cause that’s what we’re for. (Hubby only wishes!)  😛 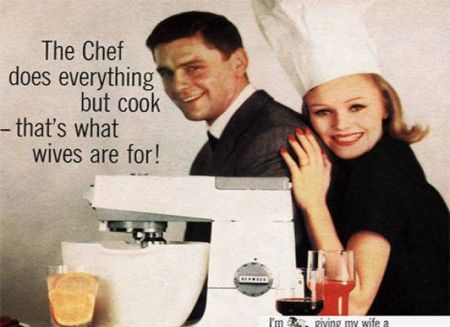 Finally, being mindful of the season (I was out Christmas shopping in the afternoon, after all) I couldn’t resist throwing in this hint from none other than our 40th president, Ronald Reagan for a fine gift suggestion this Christmas. No wonder health care costs rocketed. It’s a wonder half of us are even alive.