All kinds of things went wrong last week. First off, exactly a week ago we learned the money (big bucks!) we’d wired to India through our bank to the travel agency in India–prepaid to cover our travel accommodations within India in January–had gone awry! Soon after we learned an agent there had given us the wrong account number.

So we had to wait and worry until the money finally showed up there (sometime on Wednesday), then wait again until the bank rejected it due to the incorrect account number, then still more waiting until they redirected back to our account again. Meanwhile, I’m having visions of being on some bureaucratic list that locates anyone is this country and freezes everything up while they investigate international money transactions (so we don’t make cash donations to subversive terrorist groups, one supposes). Hubby suggests we re-send money from savings, there’s no way I’m ready to cough up another pile of money without retrieving what we’ve already sent.  And you can be sure there will be fees all around–for their bad, not ours!

Then, during all this, when we need it most so as to print up documentation of our transactions, the printer breaks down. One minute it’s working fine, the next it doesn’t recognize the ink cartridge we’re using. Some days it doesn’t pay to get up in the morning–other times it stretches out through most of the week.

It was a cheap printer to begin with, we’d had it only a little over a year. We weren’t sure if purchasing an entirely new set of ink cartridge and re-installing would be the answer, as some “experts” suggested. If it didn’t, we would have wasted as much money for the new ink as the printer cost to begin with. So we chucked it, and ordered another printer online–needless to say, a DIFFERENT brand. We have our S**t list of bad printers in case you’re interested to know, but that’s a whole new post in itself.

In the meantime, in case we ever thought we had control over our everyday lives, the weather decided to remind us who has truly has all the power and the glory–like we didn’t already know!

After a very windy Friday evening and all day Saturday, we went to bed Saturday night to the sound of icy rain hitting the deck outside the bedroom.

Sunday morning I awoke to the smell of coffee (Hubby had gotten up earlier as always) and what you see in this photograph of the trees right outside our bedroom window.

Beneath the down comfort I was curled up in, it was so warm and cozy that I debated about even getting up, but eventually the smell of coffee worked its magic.

Here’s what Hubby captured an hour or so earlier while it was still dark. The snow-unholstered chairs seem to be waiting for someone to sit down in them and slice up the giant 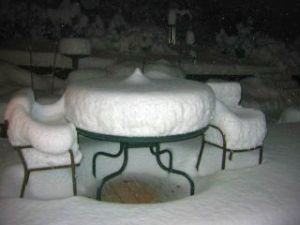 snow-cake that fills the table. In case it’s not clear, that’s between 12-14 inches piled up. When I look at it, it conjures up the sounds of Mussorgsky’s Pictures At An Exhibition, don’t ask why…some things just are. In case you’d like to hear it, you can click this link.

There’s something magic about being high up on a hillside, with snowflakes swirling all around, reminding you that whatever plans you thought you had for the day, sometimes nature steps in and makes other plans. And it’s okay. So you do the equivalent of turning on the fireplace (remember when we had to make a fire?), and look for the book you’ve almost finished reading.

The only problem is, for some it’s not about curling up with a book and a cup of coffee, it’s all work. To wit: 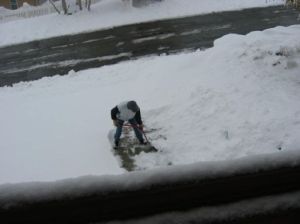 A man does get weary. With his renewed wisdom–don’t sweat the small stuff–he tells me later, “It coulda been worse. At least it’s snow and not horse poop.

That’s the way it was.

Today, the bank informs us around mid-morning that the funds have been tracked down and being deposited into our account. The roads are thawing nicely so we can get out in the car and drive down the hill to the bank and take care of the new money draft–hopefully with the correct account number THIS time, and the UPS tracking systems shows our new printer was loaded on the truck in our local terminal early in the A.M. for delivery today.

Since we’re not expecting another major storm until Wednesday, Hubby wants to go see the new Harry Potter movie. It really is all small stuff!

Oh, and just in case you live in a snow-starved area of the world, here’s another couple of choice digital shots–more proof that Utah has the best snow in the country. This is our neighbor’s back yard next door:

And this is the neighbor’s house across the street. What you would see if the snow wasn’t there would be the Great Salt Lake (about where that little strip of blue shows up about  midway down). 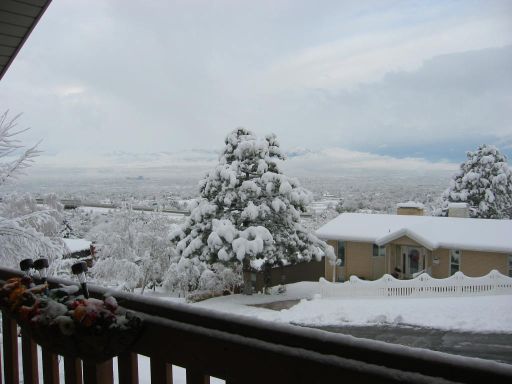 13 thoughts on “power and the glory”