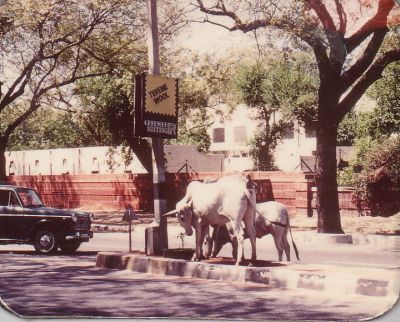 It’s been a busy two days, with the election and a day full of classes and lectures and campus events which I’d love to expand on at a later date, but first I’d like to offer entry two of my memories of the very first trip to India thirty years ago. How time flies!

According to notes on 1980 kitchen calendar:

March 25, went shopping, Connaught Circus. [In retrospect I’m sure we did more than that. But here’s what I remember about that day]:

Daylight came much too soon after our wee-morning-hour arrival, and brought with it thoughts of what were people back home doing. It would already be evening there. If I were home I might be clearing away and cleaning the kitchen, maybe watching television or perhaps talking with a friend on the telephone. No matter what I’d be doing, it would be familiar, and I wouldn’t have this sick feeling in my stomach and wondering how slowly (or fast) the next several weeks would go by and no idea of what to expect.

Sleeping, what little I’d managed, had been a series of alternately closing my eyes, dropping into a spinning black void, then being jolted awake by the piercing bark of a neighborhood dog. When I finally open my eyes to the new day, there was no one else in the room. Both girls had spent the night on mats in the living room with their cousins and the other grownups. In that special way children have, they seemed to enjoy their communal sleeping arrangement and were playing happily with their new Indian cousins. As soon as I began to stir about making noises, the bedroom door opened and a big cup of hot milky coffee was pressed in my hand and I joined the others in the main living area.

While children and adults indulged in coffee and cookies (or biscuits), the real breakfast would not be served until much later in the morning, about 10 o’clock. Everything, so different. Lunch would follow at about 1 or 2 o’clock, with tiffin (or snack)  around 4 p.m. Dinner was served–by American terms–very late, eight thirty or nine if I recall correctly. And there was coffee. Always coffee. With lots of milk heated just to boil and sugar and the expresso-type strong coffee syrup stirred in.

Preparations for the day took place afterwards with Indian style bathing–or bath–or what Indians call “morning ablutions” were performed in the tiled rooms (there were two in our host home) one with an American toilet in the corner. Instead of toilet paper, there were several small plastic pails available to be filled with water from the water tap along the wall. There was another Indian style toilet nearby. Indian style meaning a hole in the floor with a vessel to sling into it in order to activate a flushing action and carry everything into the sewer. I can’t say I ever quite got the hang of it all, but I grew to love my bath.

Basically, you mix hot water from a small water heater with colder water in a good-size bucket, then wet your body by dipping cupfuls of water and pouring over yourself. Then you’d soap yourself all over, then rinse yourself off using the same plastic cups of warm water from the bucket. My biggest challenge in bathing was keeping my fresh clothes from getting damp from all the splashing, and then getting myself dried sufficiently with the thin towels. With the number of bathers versus the number of towels available in one house, there was no such luxury as two towels–no absorbent terry cloth.

My husband had tried to explain how different things would be, of course, but I had no concept of how spoiled I’d been as an American. Up to that time, I always thought of myself growing up slightly disadvantaged materially in my southern farm home. Now I knew that even the poorest Americans lived an easier life than most Indians, even those in the educated, upper middle class family Hubby sprang from. Thus began my journey to better understanding the world and myself.

I knew about social custom and obligations to know that if I were an Indian woman, I would be expected to share kitchen duties and instead of being served, I might be serving the others, but as an American I was being given special privileges. I knew that, and I also knew that no one expected me to be the dutiful daughter-in-law figure, yet I felt the family surely must have preferred their youngest brother had found an Indian bride instead. Not only would she have been smaller (I was 5 ft-4 or 5 inches then–nearly half a foot taller), she would not only have been more graceful but she’d have a beautiful black, very long thick braid.

AND, she’d speak the language. This Indian family I was meeting for the first time were doing exactly what families in the U.S. do when they get together after long absences. They were swapping childhood memories. While she might not have grown up in the same neighborhoods as Hubby and his brothers, therefore familiar with all the stories, she would still be able to join in the chatter and laughter of shared childhood reminiscences. All of them except the children could speak and understand English to various degrees but naturally it was easier for them to communicate in their native language of Tamil. One or another would interrupt to explain to me what was being said, but it was difficult not only for them but for me as well. I didn’t want to feel like a warped wheel, but at times I did and it only added to my homesickness. I truly did understand their dilemma but understanding didn’t make me feel much better.

It was decided sometime during the morning that we’d take a little shopping excursion to Connaught Place in the heart of New Delhi. According to my recent internet exploring, by the late 2000s, Connaught Place may have lost its old glory. Adding further negatives, it was the site of two of the five terrorist blasts of the Delhi bombings in 2008. But in 1980 it seemed to me to be THE shopping hub for anybody who was anybody, located in the heart of the city.

Completed in 1933 by the British, who thought a circular structure for the market would benefit both shopkeepers and shoppers,  markets and shops in Connaught place are structured in the form of rings comprising of inner and outer circle. In 1995, it was renamed Rajeev Chowk (marketplace) after Indian Prime Minister Rajiv Gandhi who was assassinated in 1989. What I remember is walking in endless circles with shops lined up one after the other and the other. This was not a shopping mall to window shop and come back to buy an item you may have seen earlier at either the 3rd or 5th shop you entered. They all looked exactly the same and anyone would be at a loss trying to locate the same shop again.

The outer circle is technically called Connaught Circus and is divided into blocks from G to N; the inner circle Connaught Place is divided into blocks from A to F, and I presume–by my calendar notation–that’s where we went. There’s also a ‘Middle Circle’. It was interesting beyond belief for a people watcher like me, so many people, so much going on that it was a potential nightmare for parents with small children. If they were at all prone to wander, as most children are, they could be swallowed up by the crowds in the time it took to glance at a rack of Salwar Kameez. It was crowded, flooded with both shops and people, hot and humid, with hawkers standing in front of shops touting their wares, adding to the general confusion and chaos.

Outside, on the way to find our driver and car in the parking area–the only way to go shopping there was with a driver and car, since parking seemed practically impossible with cars several deep waiting to park in the next available space–we encountered a hawker selling a little gadget for doing yarn embroidery work simply by pressing it in and out of the fabric. I watched his demonstration with awe and couldn’t resist buying one, which I think might have cost me one rupee. The exchange rate of dollars for rupees at that time was about 40 rupees per American dollar if I remember correctly, so I considered it a near-steal and didn’t even try to bargain. When my sister-in-law learned what I had to pay for it, she chastised the seller for taking advantage of westerners. Clearly, I had a lot to learn about India.

After just one full day in New Delhi, I was mesmerized by the rich variety of new experiences I was having, and very much looking forward to tomorrow’s train journey to Agra for a bus tour of the Old Fort and the Taj Mahal. And I was feeling much less homesick.