From the little biddies we raised in big cardboard boxes by the fireplace in our kitchen ’til they were big enough to transfer to the chicken pen–to the injured baby pig I named Buster and hand-raised as when I was a bit older, ever since I was a very small child I’ve always had a soft spot for animals and fowl of all kinds. I had a succession of dogs from the time I was around four. I wanted to marry my dog Trixie when I grew up–that’s how much I loved her! Though I wasn’t allowed to have cats then, I did sneak food to and pet the strays that showed up from time to time, and when Daddy ordered my brother to shoot them next time he saw them sleeping on the ledge outside the kitchen window I mustered all the intestinal fortitude I could and chased them away to save their lives. When I was older, I bought a green parakeet I named Pete from the dime store in town, and trained him to sit on my shoulder. Whenever I was home, he rarely spent any time at all in his cage. That was to sleep in at night! So you can say I’ve always had a soft spot for animals.

So, is it any wonder that Hubby and I great difficulty knowing how to handle the critter problem that comes with living in a mountainous area? I mean, the animals WERE here first, weren’t they? My neighbors announce they have RATS but have no problem calling the exterminator. I saw an enormous rat beneath the bird feeder on the backyard hill and wondered about his family, especially the babies back in the nest with mama rat. I watch the gambel quail families trot by in a perfect queue nearly every afternoon and worry about the occasional hawk I note perching nearby. . . or the cats some of the neighbors allow to roam the hills in spite of the possibly hungry coyotes still around, and my heart hurts a little each time the trailing kiddies are fewer in number. By the end of the summer, there are usually only four or five from their original number of dozens. 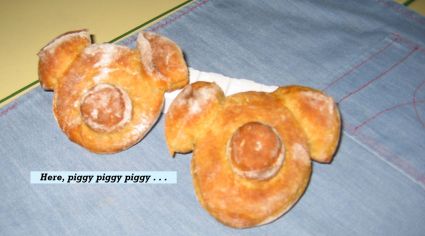 While this has little to do with animals, a few days ago when I answered the doorbell, the grandchildren thrust these little goodies in my hand. They were so adorable I had to take a picture. My daughter–and the kids–made them and knowing how much I like pigs, wanted to share them with us. Next morning I had one for breakfast, and felt like a murderess as I bit into the ear. Somehow I got it all down, and it was delicious! 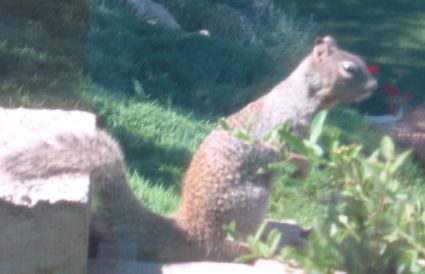 This little guy or girl, or members of his/her family who live, I’m pretty sure in burrows below our backyard deck, spent an entire morning outside our bedroom window, barking. There was a dried squirrel carcass under the apricot tree, and I wondered if it was a baby crying for mama. Actually, squirrels bark! Anyway, it was perfectly apparent that he was calling somebody. Squirrels, rabbits too–as there’s a fat one of those in the yard too, prefer to live where there’s an abundance of food, usually an area with nut- and seed-producing plants. And why not? Bingo! We have cherry, almond, pear, plum, and apricot trees in the back. I also try to plant flowers for bloom and a few tomato plants around the end of May. The first summer I planted tomatoes with a row of marigolds all around them to discourage the animals and guess what? Squirrels and rabbits in our part of the Wasatch love marigolds! They’re apparently very tasty. My flower garden this year is very sparse but there are some very fat squirrels and rabbits there. If that’s not enough, we harbor animals inside the house. This year, my patience as been sorely tested as I watch my pretty little flowers disappear one by one. I am making notes, however, of what they don’t seem to like. Next year, we’ll have lots of geraniums and zinnias.

The kids (daughters 1 & 2) and Hubby gave me this Mickey Mouse telephone one Christmas when we lived in Ohio, twenty or more years ago. I’ve never grown tired of him, and several years later–about the time I began to wear glasses full time, I bought Mickey a pair too. He was probably around 52 at the time since Walt Disney created him in 1928.

Now for an update on the mice we have in our home. Since we moved here nearly five years ago, we’ve found three drowned mice floating in the guest room toilet, not quite at the rate of one per year. The other two bathrooms have for some reason always been spared. If you’ve never experienced walking bleary eyed into the bathroom in early morning and finding a dead mouse in the toilet, you haven’t missed a thing! It can be quite startling! The dried black-eyed pea bag in the pantry continues to dwindle pea by pea, but still our mice (or mouses?) continue their polite habit of not pooping in the pantry. As far as I can tell, their toilet is under the kitchen sink with the detergents and comet. I’ve shoved everything else into plastic containers but left the peas there as a humane gesture. We’ve acquired a “humane” mouse trap, but so far the peanut butter and nuts have not enticed sufficiently–or else we have college educated mice!

This morning, the man who has been renovating our house showed up and at this very moment is ripping out the tile in the guest bathroom, the last project in our fix-up program. Remember, that’s the bathroom with the toilet our mice seem to prefer to drown in. In a couple of weeks if all goes well, we’ll go from having turquoise bathtub and sink I have to bend down to wash my hands, what I consider a kiddie’s bath from years gone by, to more sophisticated (hopefully) white sink and a deep soaker bathtub. I made sure to take before photos to remind myself why we decided to spend the money. Art (the contractor’s name, not the mouse) is an expert at making messes and noise, and I’m thinking he’s outdoing himself today! I’m thinking also that if said mouse or mice are holed up in the wall in there, who knows where they’ll run to trying to escape the devastation.

Hopefully, it won’t be here in our office in our printer like the one in this picture a friend in Pittsburgh sent in an email attachment. An internet search for the source shows it to have been around since at least 2005, so I’m unable to acknowledge a source, but apparently lots of folks thought it rigged or photo-shopped. Knowing what I know about mice, I could well imagine this happening. I mean, toilet? printer? your choice. Which would you choose? And with all that banging and bashing going on in the bathroom today, I feel a little sorry for Mrs. Mouse if she’s trying to get the kiddies to nap, ’cause it ain’t gonna happen! Meantime, I’m going downstairs and spend the rest of the day doing laundry and ironing.

8 thoughts on “critter haven in the wasatch mountains”