Cemeteries intrigue me. I am not morbid, nor am I obsessed with thoughts or worries about my death, although I’m well aware I’m a lot closer to it than I was sixty years ago. But as much as I think of them as a quiet place for solitude and introspection, I think many others think of them as macabre. Am I just weird? Actually, they’re so full of history. Why would anyone not want to visit the final resting place of those who no longer belong to our world, whether or not we ever knew them?  Think of it this way: through our visits they can briefly reclaim their lives in a sense–at least for as long as it takes us to read the words imprinted on their headstones.

The scenes showcased here are of the cemetery at St. Paul’s Chapel–located across the street from the New York World Trade Center Site, by the way–where we visited last fall. My family is aware of my oddness and they accommodate my weird tastes as well as they can. Worthy of note is that St. Paul’s (below) is distinguished as being the oldest public building in Manhattan in continuous use since it was erected in 1766. It was also witness to the great NYC fire of 1776, and hosted George Washington on the day of his inauguration day in 1789. 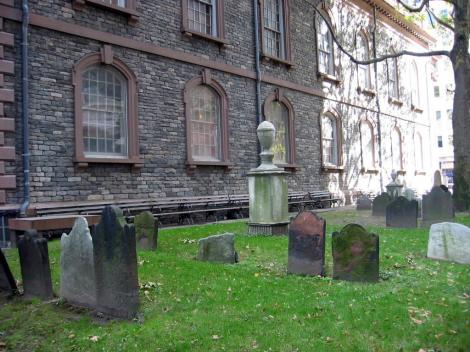 I learned that both rich and poor lie together here. Anglo-Saxon names predominate though there is a variety of nationality–Scotch, French, Dutch, German, Welsh, Swede, Hebrew and West Indian. It’s rare to find an octogenarian; Women died early, and most wives recorded as under 30. One man lost two wives, both young, within three years. Deaths of children seem common, many of them lost in infancy. A single tombstone records seven deaths under one year. Imagine the tears shed over those graves.

Lawyer and Poet Francis Scott Key, who went on to write the poem that became our national anthem,  who died in 1843, is buried here. The tomb of Alexander Thomas proclaims him a native of Boston. Another Francis Scott, aged 44, drowned while saving a child in the East River in 1811. (One can only hope the child survived.) On the monument for Mrs. Lydia Stringham, wife of Dr. James Stringham, who died January 10, 1813 when she was only 30 years old is the following quaint inscription:

“Stranger, tread lightly on this sod, it covers the earthly remains of one who was not only a wife, but the only child of a widowed mother, and the only surviving parent of an orphan daughter. The duties of which interesting occupation were performed by her in a manner worthy of the emulation of an older Christian. She endured a long and painful illness with an entire resignation to the divine will and a cheerfulness of mind perculiarly her own. (Oh! She was gentle, virtuous and sincere). Too pure a spirit to continue here.“

This inscription on a tomb erected by Henry George in 1808, in memory of Catherine Owens, “his intended bosom companion” who died aged 24.  Could that Henry George be an ancestor of Henry George who authored POVERTY AND PROGRESS in the late 1879? A French inscription on a tomb covering the remains of Moise Mendes Seixas, state that he “deced 6 11 Juillet, 1817, aged 66 and 8 mois set, 15 jours.” According to St. Paul historical records, he was evidently a descent of Gershom Seixas, an early Jewish Rabbi in New York, but there is no explanation of how he came to be buried among Christians.

I could have spent the whole day right there, I think, but there just wasn’t enough time. Ironic isn’t it–that all those interred in the cemetery probably said that many times in their lifetimes? Now they have all the time in the world. So I took as many pictures as I could before we had to move on.

Just a few days ago, Hubby asked me at breakfast (I have no idea what brought the subject to his mind—unless he knows something that I don’t) if I had decided whether I wanted to be buried or cremated as he intends. I don’t relish the thought of cremation any better than being buried six feet under, so I told him I wasn’t going to make any decision. He could make that decision for me after I was dead. Now that I’ve spent this time reflecting and writing this, however, maybe it wouldn’t be so bad to be buried in a historical churchyard like St. Paul’s. The nearer to the hub of the city, the better. I don’t expect I’ll be up to protesting regardless of what he decides. But I want everyone who walks by by grave to note a similar inscription as this one that I’ve seen in several cemeteries around the U.S.–to remind them they are not immune.

And should there be any way at all possible to cross that great divide between those two worlds–living and dead–and should I sense that whoever is walking by is the least bit frightened, don’t be surprised if I jump out and say BOO!