I wish I could remember who the blogger was a few years ago who wrote about a friend having been diagnosed with shingles who was then in the throes of not just an active attack but an acute attack, because I would write to tell them Thanks! for the warning. As a result of reading that blog, I was quite ready and willing to have the shot my doctor recommended only a few weeks afterward as a precautionary measure.

Please don’t mistake these for hives. Hives are caused by an allergic reaction. Herpes zoster, which we commonly refer to as shingles, is a painful, blistering skin rash due to acute infection with the varicella-zoster virus, the virus that causes chickenpox. Apparently it feels as if you’re burning underneath the skin and narcotics are needed to deal with the pain. Plus there’s no way to predict how long they’re going to hang around to annoy you.

The person mentioned in the blog I read and mentioned above had still not recovered even after a year. So I urge anyone who had chicken pox as a child to read and take heed, as the 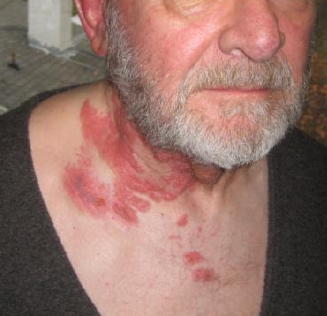 virus stays in your body and may not reappear for years, but when it or if it does this is how it presents itself:

Our friend Robert sent us these pictures in an email recently to show us why we haven’t been seeing him at the gym latetly. The good news is that, unlike chicken pox, it isn’t passed on from one to another through exposure, but the bad news is that it tends to reappear  as we age as I noted above.

He didn’t send the pictures to gross us out, but just wanted to urge us to get a vaccination against it as soon as possible because he’s been suffering from it terribly this summer.

You can see it seems to have no boundaries, as it’s crept up into the hair line and inside the ears. 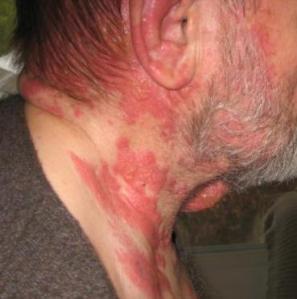 I had the vaccine several years ago, and hubby had it a year later although he fussed a little at my insistence because of the cost. In our case, the full cost was nearly, but not quite $200 each. The insurance we had at the time didn’t cover it, but the doctor assured us every one of us should have it. Now that I see what Robert’s going through, I’m so happy we did.

Some insurance seems to cover the cost or at least a substantial part of it, as I’ve learned from other friends. In our case nearly $400 (or about $180 per) seemed like a lot for something that MIGHT not happen, but if you get shingles . . . heck! Just see here what our friend Robert says in his email when I mentioned cost:  Alice, since getting the shingles and knowing what the hell that they are, I would gladly pay $20,000 for a shot.  I’m still not over them even though they have scabbed over and there is little visual evidence that they are still there.  I’m still having great pain and taking the narcotics to make the pain diminish.   I worry on how that is going to leave me.  Three straight weeks of narcotics!

There, you have it! Even though I’m lucky to have had the vaccine, and my case of chicken pox was very light when I did have them, I appreciate Robert agreeing to let me pass along the message to you along with these vivid pictures. As he would say, “don’t ever get the shingles if you can help it!”