It’s 4:42 p.m. as I sit down at my keyboard to enter my post for today. I thought I’d do things a little different today, so instead of blogging first, I decided to get a few things done from my list of needful things to accomplish today, then blog later even if it meant just before midnight. So far so good in this daily posting challenge, but I already realize I don’t know how people doing a personal blog as a hobby, or other more personal or individual reasons, ever manage to do it every day of the week. That takes a lot of dedication. I’m already looking forward to December when I plan to drop back to two or three times a week.

First I took the upstairs bathrooms and made things not only look clean but smell clean too. After that was done I decided to go downstairs and begin the next little quilt project on my list–a lap sized version of a retro-style quilt. This one will be a diagonal series of 2 1/2 inch blocks printed fabrics like those from the 1930’s (tiny ducks, cats, flowers, etc.) connected by 2 1/2 white blocks. First order of business was to rotary cut all the prints that had already been cut into 5 inch squares into quarters. Precision rotary cutting is easy but takes time because you need to measure as precisely as possible, all taking time.

Then it was time for lunch. While we were eating, Hubby–who had been outside trimming shrubs and bushes–announced that we should get in our day at the gym in the early afternoon. While I was chomping at the bit to get back downstairs to begin cutting out the contrasting white squares, I agreed that it was good to get the exercise done. Another routine, but a necessary one. After an hour or so of playing e-card games while we let the pizza settle we set off. Sometime over the summer I had hit onto a nice routine at the gym and now, once I’m there, I don’t mind it half so much as I used to. Come along with me and see how I’m managing to conquer my hatred of routine exercise.

When we arrive at the gym, the first thing I do is take a towel and choose a stationary bike and set my reading material up. After I’ve washed down the bike with a disinfectant soaked paper towel, I adjust the settings and pedal for a half hour. Others may think I’m anal about cleanliness in the gym, but being on an immunosuppressive drug as I am for RA, I must be extra careful about germs so I’ve made it my goal never to touch a surface in the gym that hasn’t been sprayed and wiped, and that’s where the towel comes in. When I climb the stairs or open a door, the towel is what touches the surface, not my hand.

After the biking session, which I mainly do to strengthen the muscles of my knees to help keep my joints flexible and support my weight on those muscles rather than the joints themselves. Since I had knee surgery in the late 1990’s, I can tell you that if you suffer osteoarthritis, it definitely helps if you do it regularly.

Afterward I go into the ice rink area. Actually, there are two rinks separated by large thick glass walls so you can into either one if you’re walking around the rink. This one has a smaller audience area, and it’s where hockey players practice, or sometimes–like this day–they have small audiences and people with cameras around being nosey, like me.

During much of the summer, however, when I took these pictures,  this rink is where the kids were practicing and getting ready for the qualifying rounds of the  junior ice skating regional championships. This is where I like to do my brisk half hour walk around the rink, which totals a little over a mile and a half at my pace, at least three times a week.

Not only does it give me entertainment to focus on while I’m walking instead of my creaky knees, there are always coaches down on the ice working with students and one or another will put on a program of music for skaters to do their routines to. The music is quite nice, the usual sort of music you expect at an ice rink–from a bouncy Rockin’ Robin from the 1950’s or Broadway favorites like Gershwin’s American in Paris and Rhapsody in Blue, to Ravel’s Bolero just to name a few. My feet fall naturally into a rhythm to match the music numbers and before I know it, the half hour is up and I’m ready to go into another part of the gym. 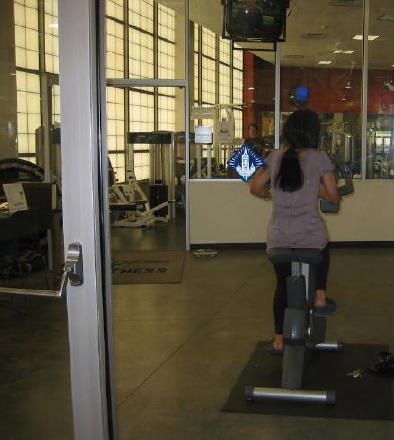 This is one of the bikes, and you can pretend this is me with flowing long black hair. Beyond is the weight room which I used to do a little working out, but the handlebars on the machines are saturated with sweat and the air infused with testosterone that I quit going there. Now I follow my walk with a few minutes at a rowing machine and that’s about all the upper body work I’m doing for now. I’m up to seven minutes per session, and who knows? One day I may learn to even like it.

So this is a typical day for me on gym days. I feel good that I’ve managed to post 9 posts in a row, though, as well as learning to get the routine exercise in every week without whining too much now that I have such an interesting routine. I was thinking about it today during the walks around the ice rink. If we’re less rigid with ourselves about the way things “oughta be done,” not expecting perfection and letting things progress as they will with the best of intentions, everything about routine things that bog us down–from exercising to blogging to doing housework–can be overcome, and things can get done.

Tomorrow, back to the quilt!

9 thoughts on “stick-to-itive-ness gets things done”