Looking at this old photo taken in Cedar Key, Florida possibly as far back as the early 1960’s, it’s easy to see why this restaurant is no longer there. Cedar Key was a quaint little fishing village on the west coast of Florida just below the panhandle and north of Tampa, barely an hour’s drive from where I grew up.

It was a fairly frequent weekend destination for us in less busy seasons of the year, especially when we felt the urge for freshly caught fish dinners or gulf shrimp. Sometimes someone in the extended family would drive over on a Saturday and buy several pounds of striped mullet the west coast was known for and bring them back to share with the rest of us in a joint-family fish-fry complete with hushpuppies and sweetened iced tea.

Sometimes the family went along and the grownups would fish with a cane pole sitting on a portion of the boardwalk with other fishermen, while my brothers would go crabbing with sharp pointed poles. Once, when I was 16 or so, several members of my father’s family, including my grandmother, chartered a boat and went deep sea fishing. The fishing trip was shortlived though, as a storm began brewing and the waves got choppy and several people started turning green at the gills and hanging overboard to vomit. I felt pretty superior that I didn’t have a problem, but very sorry to see how ill my grandmother was.

As I got older and more mobile on my own, I preferred to drive over with friends to eat shrimp and hearts of palm salad at the boardwalk restaurant where the views were magnificent. I’m not  certain when, but I know that it and much of Cedar Key was destroyed by a hurricane, perhaps Dora who whipped across the whole of north central Florida in 1964. The boardwalk was pretty much destroyed along with the restaurant.

When we visited Florida exactly a year ago today, it was one of the first places I wanted to re-visit after a small family reunion at my brother’s rural home in Columbia County. I hadn’t been there in 30 or 40 years and I wanted to see if it had maintained the charm I remembered from childhood.

It had changed quite a lot in some ways. I don’t remember all that many commercial buildings (top photo) back in the 60’s, and the boardwalk had been replaced at the edge of the gulf now, not extending out over it as I remembered it. I did find these skeletal foundations for what may have been part of the boardwalk where the old restaurant was.

This is what Dock Street looks like now. It runs along the water’s edge, but with the concrete sidewalk and street and what appears to be solid ground beneath them, it’s probably sturdier against hurricane force winds and cyclones, but not quite as much fun somehow as walking out over the gulf on a flimsy boardwalk.

The second reason I wanted to visit these scenes from a favorite childhood place was to meet a fellow blogger. I’d discovered Terri Writing Away in Cedar Key around the time I started Wintersong. I wrote her and began visiting her blog and we developed a friendship through our shared passion for writing and visiting back and forth through blogposts and comments. When I told her of our plan to visit Cedar Key, she invited us to meet her for lunch on Dock Street. We arranged to meet in front of the restaurant that bore the name of my old favorite, although it wasn’t the same place.

Hubby chats here with Terri and her husband Ray, who treated us to a delicious lunch. I ordered crabcakes, which I ordered several more times while in Florida and never seemed to get enough, but was too full afterwards to indulge in a hearts of palm salad. Instead Terri and Ray invited us to follow them to their home on the island where a delicious dessert baked by Ray, carrot cake if I remember correctly, was waiting for us along with a hot cup of coffee. 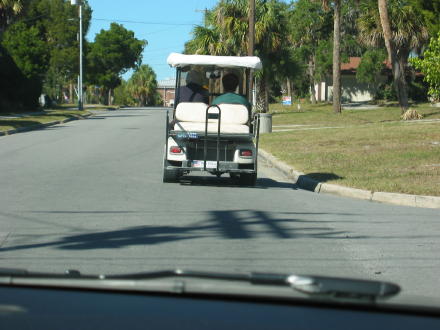 This is how Terri and Ray get around. Yes, it’s a golf cart and the island is small enough they don’t bother with the big car. We followed behind in our rental car, not nearly as much fun as a golf cart, but the charm of the island was beginning to come back to me after all.

Along the way, we stopped off for a few minutes to see Chez Soliel, the vacation rental home they recently opened. It was lovely and spacious, and if we ever have the chance we’d love to spend some extended time there, but it’s really too big for just two people. The trees with the Spanish Moss were another fond memory, as were the abundance of flowers. Always in the distance was the occasional glimpse of the gulf and sea air.

After animated conversation over dessert, we found we had a lot of things in common–particularly our disdain for the man in the white house at the time–and Terri gave me a tour of the house and garden and showed me her writing studio. It holds a big desk with another feature we have in common–a beautiful Tiffany lamp. I started collecting Tiffany lamps in Las Vegas and now have at least one in nearly every room in our house. 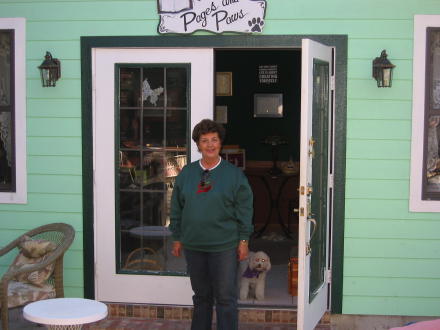 Here’s Terri in front of her studio, aptly named Pages and Paws. Not long before we met, Terri had just landed a contract from Kensington publishers to publish her debut novel. Needless to add, she was very excited. I ordered an advanced copy as soon as it became available through Amazon.com and just a couple of weeks ago, it finally arrived.

Here it is, and it’s called Spinning Forward as you can see on the cover. I have it opened here to where I am in reading it today. And I can tell you this. For a Yankee transplant from north of Boston, Terri has a done a marvelous job of establishing a definite sense of a southern locale. She has especially captured the unique and outspokenness yet quaint sweetness of the people of not only Cedar Key but much of the Florida. And oh yes. I have to add that not only is Cedar Key still a charming little fishing village, it has become even more today with its inclusion of  artists (and writers like Terri) as well, so that spinning forward as I have from my childhood  through the 1960’s to today, I not only have re-captured good memories of old times but now have even better memories.

I’m about half way into the book, but probably took less than 50 pages before I’d decided that Terri makes me want to live in a Cedar Key too, with quaint and loveable characters like those she captured in the book. I grow up only as a neighbor of Cedar Key but I can tell you that Terri knows those characters just as well as I once did. It’s nice to know that she loves the place as much as I did once.

Note: SPINNING FORWARD, by Terri Dulong is now available at bookstores, or may be ordered through Amazon.com. Those interested may contact Terri directly through her author website http://www.terridulong.com/.

6 thoughts on “looking back while spinning forward”