Wow! You have to leave home from time to time to appreciate how good it feels to be home again, back to your own bed, clothes from a closet instead of a suitcase, and the electric toothbrush you left behind in favor of the hand-held one in your quest to pack lightly.

For the past 17 days or so Hubby and I have been doing a little stalking of a sort, going back in time 32 years or more and somewhere around 2500 hundred miles in distance. It was a very interesting step back, catching up on old friends. A little depressing, considering how you feel when you learned who developed what illness and comparing it with your lot and, strangely enough, feeling lucky in spite of those pills you have to take and IV’s you have to endure every eight weeks. At least what you have can be treated successfully and you’re not dead. We learned several of old colleagues and friends are.

On the other hand, many–like the couple we visited and some who came to lunch with Hubby the day after we arrived–are still going. Naturally we tried to talk them into retiring. The reasons we heard–“what would I do with myself all day” or something like that–made me begin to think Hubby and I should write a book on retiring successfully, a blog to say the very least! I’d hate to have fear keep me from the wonderful life Hubby and I are living doing as little as possible unless we want to.

To keep this entry short, however, in keeping with Sunday snapshot memories, I thought I’d post a photo Hubby took in 1966 when we were spending a lazy Sunday afternoon on Daytona Beach in Florida where he was then a graduate student at the University of Florida. I know now of course that he’s very energetic and hates standing still very long, but I didn’t know him well at the time, but it explains–sort of–why he borrowed my camera and said he’d be back in a little bit.

In those days you had to wait until you’d finished using up all the film and took it to be developed at the photo shop, or the thriftier method of mail order processing, before you could see the pictures–sometimes that would be weeks or months. By the time I saw the picture you’re seeing here, we had progressed from “new acquaintance” to “best friends.” Turned out while I was lying on a beach towel, my new friend was out stalking: 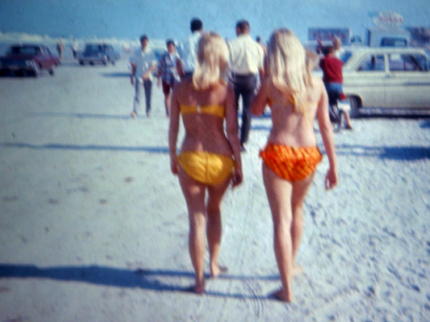 Forty-some years later, we find ourselves in New York visiting our daughter and her significant other when we decided to take the trains to Brooklyn so we could walk across the Brooklyn Bridge to Manhattan and take in the views. It’s not such a lazy day this time, but after clouds and rainy days the city is shining. We were lollygagging along like people with no jobs to go to do crossing the bridge, stopping to take pictures along the way: the distant Statue of Liberty and views of lower Manhattan and other points of interest. This time I controlled the camera. 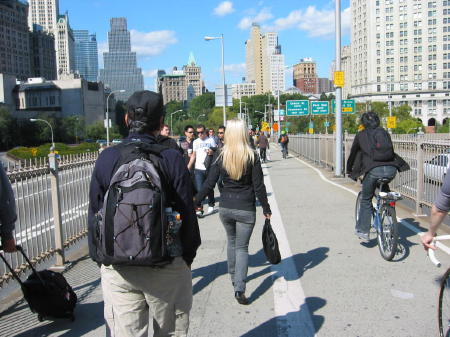 You probably wouldn’t recognize him, but guess who that is 👿 with the backpack on his back?

Years may come and years may go, but some things just never change, do they ❗ ❓  Talk about time stalkers!

Have a great week, everybody!

4 thoughts on “time stalkers and other sunday memories”