So many times in March and April, even into May, I thought winter just wasn’t going to turn loose. Most of Utah was drenched in June with monsoon like rains, double and triple our normal precipitation. It brought us blessings in fruit yield though. For the first time in nearly four years we were able to harvest–what the birds didn’t get first–enough cherries for a pie, a large tart, and a cobbler. The May windstorms knocked out most of the apricots, but later blooming strawberries were just about coming out my ears. And, if things go well the rest of the summer, the almond tree that was so full of blossoms this spring–like a ball of pink cotton candy–will give us a pretty nice yield of almonds in the fall. We harvested pecans on the farm when I was a girl, but this is my first time ever seeing and dealing with almonds, other than those sold in bags in stores.

Spring just fiddled around teasing and tormenting us until one day, summer just upped and took over around the end of June. We went off to Peru with sweaters in mid-May expecting it to be hot by the time we got back in June, but got back to overflowing rose and flower gardens and everything green seemed to be growing crazily, including the weeds. And of course the rains kept coming, until one day I knew they were pretty much done.

It was the afternoon in late June when Hubby called me to come look at the double rainbow over the hills behind our house. Then I knew I could start putting the winter clothes away. You seldom get the chance to see rainbows  this intense, especially double ones, so naturally I grabbed the camera. 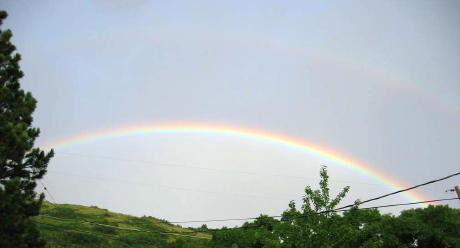 After the fruit frenzy was finally over, I was able to settle down and make a dent in my long reading list. I’ve been discovering and adding new ones to the list almost daily. Right now I’m on my third book in a series by a new (to me) author by the name of Nancy E. Turner of Arizona. The first one, These is My Words, (read sample pages) is a spellbinding story about a pioneer woman’s phenomenal struggles to make a home for her family in the Arizona territories in the late 1800s. The second one I stayed up and finished just before midnight night before last, is Sarah’s Quilt, and I am now well into the third one, The Star Garden. Both continue to follow Sarah Prine as she ages and begins to discover her real worth as a woman in these two page-turner sequels.

What I love about all three books, besides the characters, is that Ms. Turner adds a new dimension to women who were so instrumental in the settling of the old west, which up to now has mostly been either whores with hearts of gold, or helpless women needing men to take care of them. Women were mostly incidental to the plots. If you enjoy books like Lonesome Dove or Confessions of a Confederate Widow, however, this is a page turner every bit as compelling.

Some more on my book list that look promising: A series published in the United Kingdom by Hodder & Stoughton for older children and adults (at least adults like me) called “You Wouldn’t Want to be…” anything from …”an Egyptian Mummy,” “… Cleopatra,”  to “…a Soldier in Alexander the Great’s Army.” They’re colorfully illustrated and a fun read and you’re bound to  learn something no matter how much you think you already know. I wished I’d had them around when I was studying history years ago; I’d be much smarter now.

I’m also looking forward to another children’s book, “Wesley the Owl, the Remarkable Story of an Owl and His Girl,” by Stacey O’brien. I won’t tell you anymore than that, but I hope you have time to check out the link to these and those links above to the sample pages if you’re even remotely interested.

The other time thief of my time this summer has been the movies–not the ones being released currently, few of which seem worth paying even a matinee price to me, but old ones like the westerns from the 1950s and before, which are being featured during the Osher summer movie series and earlier by the Osher film society–lots of John Wayne whom I think I always under-appreciated as an actor–where I get different takes on history as framed by different directors.

Last week we saw, me for the first time ever, King Solomon’s Mines, the 1950 version with Stuart Granger and Deborah Kerr. What a technicolor story that was! No wonder it won Academy Awards for Best Cinematography, Color and Best Film Editing and was nominated for Best Picture that year. (All About Eve won.) Plus we’re finding some great foreign films through the local libraries, and catching up on lots of Bollywood movies. If you’ve never seen one of those, you owe it to yourself to check one out.  Last night we saw a DVD of a great mid-90s precursor–at least in theme–to Brokeback Mountain, Strawberry and Chocolate, that follows the development of friendship between two men in the revolutionary society of Cuba. It was a French movie with English subtitles and outstanding in my opinion, well acted and thought provoking. Gay opponents should be required to watch films like this one!

In addition I’ve been trying to sort our Peru pictures and post the highlights (with pictures) of that big adventure, plus we’re dog sitting the grandkids’ dog while they’re on vacation. That requires long walks early most mornings before the sun warms up and chases me inside. All this has kept me pretty busy. In the meantime, local news has suddenly offered some varied and interesting events.

It’s a well known fact here that several years ago the city did a land swap deal with the LDS church here which gave them regulations power over a large area downtown where the temple and church offices are located, Temple Square. Last week a couple were arrested there and hauled off to jail by the city police. The property belongs to the church, it’s private property, therefore the church can regulate behavior and restrict access there according to the laws.  As long as they pass dress code and don’t look too shifty-eyed, everyone is pretty much welcome there. One of their rules, however,  is that there be no public displays of affection.

The couple in question had been walking theretogether holding hands when one of them planted a kiss on the cheek of the other.  I’m sure that sight is nothing new for most of us this side of the hill, in fact we’ve seen far worse, but what made this case different is that  the couple in question were men, and the church gets really upset about gays period, end of sentence. Never mind many people commonly witness heterosexual couples holding hands or cuddling by the fountain and around the square. Almost any weekend you can watch brides and grooms posing around the grounds.  PDAs between gays, however, is offensive to the church (men can’t produce babies, you see, and two women can’t either without help from a man) and the church is pretty big on reproducing more members.

What was even more exciting, and indeed proves that thousands of Utahns are not LDS in case you are one of those thinking everybody in Utah is Republican and carries guns and eats green jello and believes in Joseph Smith, was the “kiss in” on Sunday in the same area of Temple Square when more than a hundred people, mostly gay but some straight, participated in a light-hearted protest. A second protest is reportedly planned for next Sunday, and some have suggested that the exact boundaries of the plaza should be determined and a weekly Kiss-In staged exactly one inch outside the total perimeter every weekend.If it had been 20 years ago, or even 10 years–maybe even five–Hubby and I might have been there with them, but we weren’t, not yet anyway.

While all that was going on in Temple Square on Sunday, on the day before Buddhists were gathered at another temple, the Salt Lake Buddhist Temple, to honor their dead in a memorial service to  acknowledge and celebrate the continuing influence of our deceased relatives on our present lives. Flowers decorated the altar, incense was burned as an offering, and the festival included a Taiko drum performance, folk dancing, and food (usually in the form of bendo boxes). We missed that, too.

I think I had my nose buried in a book

most of the weekend, so we missed all the excitement. Perhaps it was just as well since I really needed to stay home and wash my shave my legs! (see the picture?)

Oooooooooooh, sorry, bad joke I know! But it’s the only way I could figure out to show off the picture I found last week on Flickr. It was originally uploaded on Oct 4, 06 by chotda, and I’m using it here under a creative commons agreement.

It’s a Bendo lunch box (see how it ties in here because of the Obon festival item above?), albeit a fancier one than I’ve ever eaten, and features a bed of steamed rice, salad, and grilled sardines seasoned with soy sauce and hot peppers. I’m a sucker for food pictures as you’ll discover if you spend much time around here on my blog. I like the title almost as much as I like the picture: The Devil Wears Pirikara.

I guess that’s enough of my ramblings for now. So, how’s your summer going? What are your time thiefs?

6 thoughts on “time thiefs: my hazy, lazy days of summer”