When I began posting the events from our recent Peruvian adventure, I expected to stay on course and dutifully post by date. I soon found that my brain doesn’t manage well chronologically. Rather I find myself skipping ahead here to May 29 because, as much as I enjoyed Machu Picchu and all those ruins, I find the things I most vividly remember and want to share have more to do with the people of Peru than the ruins.

I’m also quite aware that one of the more boring things in the world is sitting through hundreds of slides of someone else’s vacation, so it’s quite a challenge choosing the pictures that practically shout choose me, choose me so that I can tell my tale and sing my wintersong as it were. Today’s post features a particular floating island out of the 40+ located on the Lagos Titicaca, the highest navigable lake in the world.

Last night we arrived in Puno from Cuzco by bus, stopping along the way at the village of Andahuaylillas with its main church (known for its own “Sistine Chapel”, a stunningly beautiful place as Catholic churches often are), Racqui with its God Viracochua temple as well as the Pucara ruins. Before we checked into the beautiful Sonesta Posadas del Inca hotel, our guide José gave us some helpful advice, which I believe everyone in our group followed to the letter.

Since the hotel offered oxygen service to guests–to help acclimate to the higher altitude–we should take 6-8 minutes of oxygen twice, once during the evening before bed, and another the next morning before departing for the day. Some in the group said they didn’t feel any different afterwards, but I can say with some certainty it helped me a lot. I even have a photo of myself lying on the bed with an oxygen mask on, but I won’t bore anyone with that one. I’m not that photogenic. Trust me!

The boat you see in the background is the historic Yavari, a ship recognized by the National Historic Ships Committee of Great Britain and one of the earliest cargo steam sailing ships constructed from a kit. I wrote about it in more detail in this post if you care to know more. I read about this kit ship prior to the trip and wanted very much to see it, but was so busy while there–and so exhausted at the end of each day–that the thought didn’t even cross my mind while I was there. Oh well…best laid plans of mice and men and all that. It might have been.

The exotic landscape is part of the back yard of the hotel where boats of various styles pick up and drop passengers during the day to ferry them to the floating totora reed islands along Lake Titicaca, which is where we headed to right after breakfast.Lake Titicaca is bordered by–and shared by– Peru who claims about 60%,  Bolivia 30%, and the other 10% by Brazil. José told us that the Peruvians like to brag that they own the “titi” and the “caca” is shared by Bolivia and Brazil.

Here we are at the island our group visited, being greeted and assisted off the boat by some of the colorfully dressed native women. They still call themselves Uros (pronouced oo-rows)  and continue the Uro Indian reed culture of their ancestors of more than 2,000 years ago. As soon as I set foot on “ground,” it felt as though I was walking on a thick, spongy but firm, foam mattress, a bouncy feeling. If you’ve ever tested out your Temperpedic mattress by walking on it to see if the glass of wine stays put or spills, you’ll know exactly the feeling.

Here our guide José explains how the islands are constructed. They are made of totora reeds that grow in the lake. (They somewhat resemble young sugar cane plants.) Stacked into clumps like the one you see here, dense roots develop to interweave naturally and form a new layer for support. Anchored with ropes attached to sticks driven into the lake’s bottom, new reeds are added to the top about every three months, especially important during the rainy season when the reeds rot faster. Islands typically last 15 to 20 years. 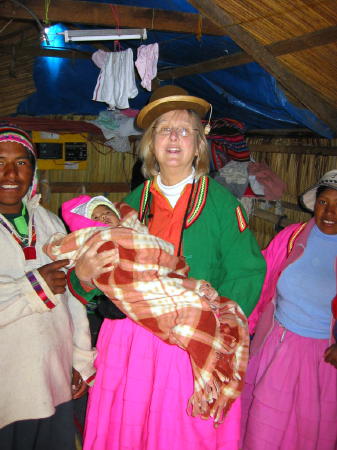 After we learned a little about the islands’ construction, we turned to explore a little on our own. Hubby and I were immediately invited by the couple in this picture to come inside their hut to see their several-month-old baby and meet the in-laws.

Well it turned out that baby’s name was Alicia, and when they learned that was my name (in Spanish) as well, nothing would do except that Hubby take a photograph with me holding little Alicia in my arms after the ladies dressed me in some native clothing, including this little hat (with the price tag hanging just like Minnie Pearl at the Grande Ol’ Opera in Nashville years back).

Of course it was very necessary for Hubby to have a turn holding Alicia after I’d had my turn, but for the life of me I cannot explain that hat on his head. The one hanging off his neck is one he bought on the cheap in Aguas Calientes when we visited Machu Picchu. Did he actually wear two hats that day?

No sooner than we left the hut, re-dressed in our own clothes, than we encountered Caroline and Kathryn not only dressed in full Uro regalia, but parading around in broad open daylight. They’d stopped here to have their picture taken. I think now I understand what that nice family in the hut we visited was trying to tell us!

Someone in our group who visited a different home managed to take this picture of a child playing. It shows a little better than mine how the inside of one looks.

One other interesting aside from Kathryn (above right) who noticed a solar panel on the hut she visited; it was really wild that the kids inside were sitting there watching soap operas. I imagine when you grow up as isolated as these kids do, any kind of television program would seem exciting, even soaps.

I cannot relate now how long we were actually on the island, but looking back now, especially after viewing the photographs my fellow travelers took, I noticed things I didn’t notice the day I was there.

For instance,  there was this reed watch tower that I saw but dismissed climbing because it looked a little flimsy and the ladder none too sturdy. I couldn’t imagine it was even tall enough to afford much of a view for the effort (maybe 15 feet?). By the way, that’s fellow traveler Judy standing there and Robert took the picture.

Well, as you can see, this is one I missed taken from the tower. (Thanks, Robert!) On reed “ground”, for instance, I didn’t notice the other islands nearby. Also note the solar panel on the roof the one on the right. Eight families live on the island we visited, and there are 40-something islands total, most of them occupied by around 10 families on each. Many have been built in the past 10 or 15 years because of Peru’s growing tourist industry.

It would be difficult to assess which reed item would be most important to the Uros. They use them in so many things, including medicinal. Certainly near the top would be the boats. They’re definitely useful living on a lake!

This young man was eager to show us the homemade rifle he uses, and even though it was probably not usable due to the rust, I suppose if we didn’t know it could intimidate. Notice the plastic jugs. They’re used in the bottoms of the reed boats, because when reeds get saturated with water they tend to dip. The jugs are used to make the boats more buoyant to avoid sinking.

It was around this time I remembered taking Imodium AD because I’d been a little worried about the typical traveler’s dilemma for good reason earlier in the morning. 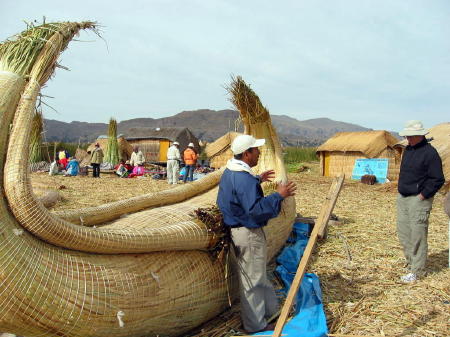 I suddenly wondered where the bano was, so I asked–because Granny Pierce always said you don’t learn unless you ask questions. To my delight, José thought that was an excellent question, and he explained. When it’s not a serious elimination you need, like No. 1, you simply find a discreet area on the island itself. When it’s more serious business you need to tend to, you have to take one of the boats and paddle about 10 minutes to another island. Thankfully, I didn’t need to borrow a boat or paddle and neither did anyone else in the group. 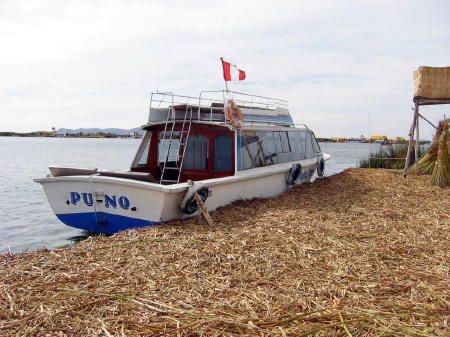 Then we saw the boat was waiting, so we hurried off for our next adventure, lunch with a Quechua family, which turned out to be one of my very favorite adventures from the whole trip. I’ll share that in a future post. 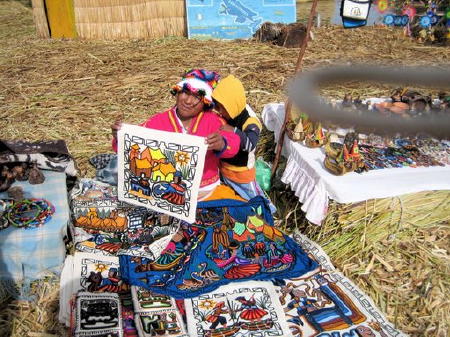 But not before one more chance to shop for handmade needlework by the women of the island. I know that the money they make from tourists is a substantial source of income for them. I also know that families will work hard to feed their families and do whatever they have to do, and although they treated us very well, I wondered if these gentle people really enjoyed having to subject themselves to the theatrical aspects of tourism. At best, I imagine it would become tedious affer awhile.

And I also felt a little sad that the thing that supports them is the very thing that destroys a little of their way of life, every day, a little at a time. In retrospect I feel a little guilty too, now that I’m home, that we didn’t tip them more or buy more of their art like this.