After leaving the jungle, hot and tired and grimy from the miles we’d trekked over the last two days, I think I can speak for our whole travel group in saying we were all looking forward to cooler temperatures and hot showers. It was May 22, and my hair was stiff with dirt and grime and unwashed since May 17, but I could not bring myself to wash it with icy cold water in the jungle lodge bathroom. Sometime around mid-afternoon, we arrived in Yucay and our hotel for the next two nights.

This is what we saw from the bus as we rolled up in front. The entrance, on the lower right above the white van, gave no clue as to what we’d encounter when we got inside. 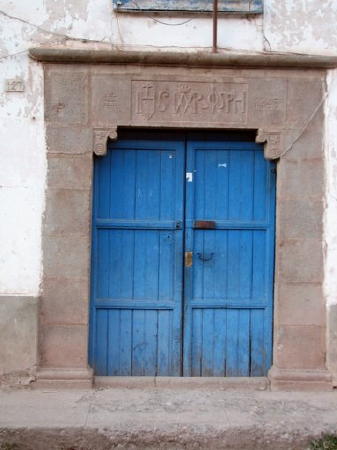 First we had to walk through an open, enclosed reception area to get to the lobby to register, but we’d had a glimpse of things to come. Because the altitude is higher, around 8,000 feet, we have a cup of coca tea. Afterwards, things definitely begin to look better.

The building above seemed to be undergoing a bit of renovation, but hope springs eternal! When I got a look at the gigantic hydrangea garden, I knew that–as long as we had hot showers and food–I could put up with just about anything else. 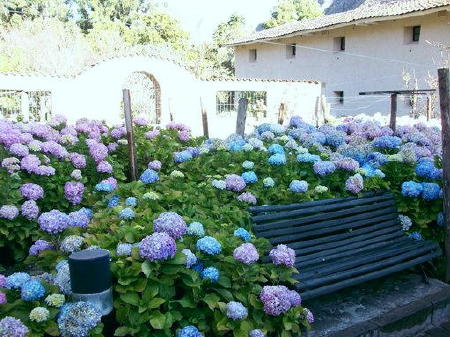 I’ve seen different colors of hydrangeas before, but never in such a mixed bed as these. I researched how to do it online and learned this. For pink plants, you need to make sure they don’t pick up aluminum from the soil. If it’s there naturally you have to figure out how to get it out. For blue flowers, aluminum must be present by adding aluminum sulfate to the soil around them if it isn’t there already. The choice of fertilizer will also affect the color change. A fertilizer low in phosphorus and high in potassium is helpful in producing a good blue color. Super phosphates and bone meal should be avoided if trying to produce blue. Now if it works for you, please let me know. 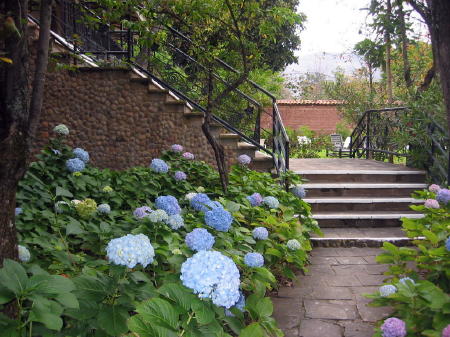 Here’s the pathway that leads to our room on the second floor. After we got inside using a huge, old fashioned skeleton key that I haven’t seen the likes of  in years and years, guess where I headed first? 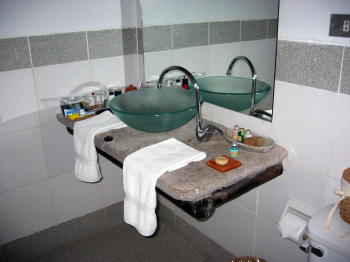 I was ready to use it posthaste, but we hadn’t had lunch yet and it was already about 3:30 p.m. We’d munched a bit on granola bars and other healthy snacks like m&ms along the way, but we were both starving. Hubby has a sugar problem, so I agreed that we should delay the bath and shampoo and go straight to the restaurant to find some real food. Without even changing our jungle-dirty clothes, we headed off to the restaurant. On the way out of the room, we noticed this little trapdoor at the top of the door so you could look to see who was at the door before you opened it. (See history below to learn more.) 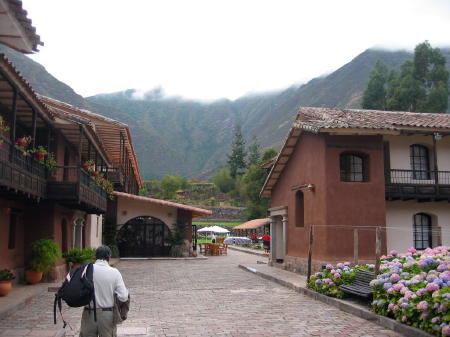 That’s the restaurant straight ahead, where the umbrellas are lined up along the side.

We decided to try the buffet since it was still available and we could just grab a plate to eat immediately, even though it would throw our dinnertime way off, or nix dinner plans completely. While we were busy chowing down, some interesting things were going on outside:

and these ladies of the village were busy stitching new items to sell.

After our late lunch and a quick browse through the handicrafts, and still looking forward to that bath and shampoo, we promised the ladies we’d be back mañana and headed back to that luxurious bathroom!

For history buffs, here’s a synopsized history of this beautiful valley and village of Yucay.

What is now the Sonesta Posadas del Inca hotel for tourists was once the home for the religious order of Saint Catalina of Sena in Cuzco. Long before that, however, in the fifteenth century, the last ruler of the United Inca Empire, Huayna Capac, visited the sacred valley and was so captivated by the incomparable beauty of the landscape here in what came to be called Yucay (which, incidentally, means deceit), he established a summer palace there. He was surprised to discover the soil was actually very poor in fertility (see? now you see why Yucay became the name) so, being a rich emperor and all, he had his Mitimaes (families taken from their communities by the Inca State, and used to perform political, cultural, social and economic functions–it’s nice to be king!) bring in the richest soils from all corners of the empire.

They did so, thereby making that state the most productive place in the sacred valley. Then he died and left everything to two sons from different wives and I guess you can imagine the feuds that led to. War between the brothers had just ended when Francisco Pizarro began his conquest. Huayna Capac’s third son, Atahualpa Capac, was the last Inca to succumb to the Spanish.

Moving ahead to the 18th century, the nuns thought it would be a great place for a monastery, and that explains the barred lookout in the picture. Unfortunately for them, however, their efforts to operate the place were insufficient so they soon packed up and returned to Cuzco where the order remains today.

Zooming now into the 20th century, Leonrio Arteaga, a hotelier and owner of Hotels Alahambra in Cuzco, restored the place with love and care and turned it into an inn, which opened with 17 rooms in 1976. It changed hands the last time when it was sold to the hotel chain of Posada del Inca and renovated to open in 1995 with 85 modern guest rooms.

I can tell you from first hand experience, it’s beautiful and peaceful (except when a wedding party books the pavillion as they did one night during our stay), and expensive. But it has wonderful showers.

4 thoughts on “sonesta posadas del inca hotel in yucay, an oasis in the sacred valley of the incas”