Tuesday, May 19:  Here we are in Lima, Peru with Spanish co-students of Hubby’s–and our special guide Marta, who is also a native Peruvian and their Spanish professor. After 30 years in SLC,  she became a citizen of the U.S. last year just in time to register and cast her first vote as an American citizen for Barack Obama. 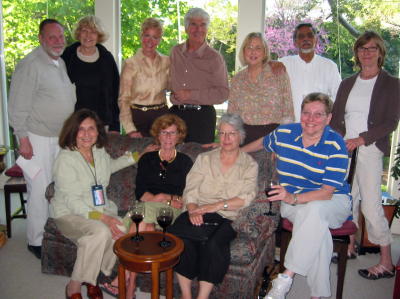 As far as I know only one other person on the trip besides me doesn’t speak Spanish or take Marta’s class. All that remains of my conversational Spanish from many years ago are the very basics, like good morning, see you later or tomorrow, Feliz Navidad, and of course counting up to ten. Hubby can read and write it, but still has trouble understanding it when it’s spoken fast.  We bought a hand-held electronic Spanish-English dictionary we can use to translate in case we get into more need for Spanish than Hubby can manage. Just the same  I think asking Marta to guide us was probably a good idea, and having her travel agent sister arranging our tour was a second good idea, as I feel certain she’ll not let us get into too much trouble.

Our first day here begins with a morning tour through Lima’s historic colonial area where we can see its architecture and urban design along old streets filled with colonial houses adorned with Moorish-style balconies. Along the way is St. Peters church, finished in 1638 and one of the finest examples of religious, colonial and Baroque style of architecture in Peru. The interior is noted for its gilded arches and altars and hand painted tiles, sculpture and artwork by the Jesuit artist, Bernardo Bitti. The Monastery of San Francisco (1674)  is said to connect to other catacombs beneath the Cathedral and other area churches. Also along Plaza Mayor (main square) are Government buildings, the Archbishop, Osambela, and Torre Tagle Palaces, and Santo Domingo, all of which reflect Peru’s Spanish heritage.

Next will come a welcoming lunch at the Huaca Pucllana Restaurant, which by all accounts is a high-class, very fine restaurant in an extraordinary location with an equally extraordinary menu (and probably the last dining places this fancy we’ll see on the tour). Then there’s a visit to the Amano, which is a private museum housing textiles and ceramics coming from different time periods,  especially the Pre Inca days. It is considered to be the best collection of such artifacts in Lima.

Afterwards, we get to view the Poli private collection with the collector himself, Enrico Poli, who will show and tell us about his collection containing more than 3,000 years of Peruvian culture from Chavin ceramics to Moche objects, including royal objects from Sipan. There’s also an exceptional exhibit of silver work from the colonial period.

Whew! It sure sounds like a full day, doesn’t it? I’m sure we’ll all be happy to get back to our hotel tonight. We’ll be treated tonight to dinner at Marta’s favorite Chinese (Chifa) restaurant in Lima. I’ve had Chinese or Chifa cuisine in different parts of the world including India, and each one reflects to some extent the influence of the local culture. It’ll be interesting to see what Chinese/Peruvian menus are like.

Too bad we may have to forego Peru’s signature drink, the Pisco Sour, a drink made with Peruvian brandy, lemon juice, because among its ingredients are whipped raw egg whites.   Maybe the lemon juice kills any possible bacteria, but at this point I’m not sure if I’m willing to take the risk. We’ll have to  see. I hate to miss out on something special to the region, but I wouldn’t want to get sick because tomorrow we’re off to Puerto Maldonado in the Amazon region. This is the part of the tour I’ve most looked forward to: a boat trip down the Tambopata river to our lodgings.