It was a blustery spring day, and my brother was on an outing with his friends. I felt left out because I wasn’t allowed to tag along, but I am a princess and I know that boys don’t like princesses on their outings sometimes. But princesses need to go out too, so Grandpa and Grandma took me to Grandpa’s  favorite Taco Bell and we had a big lemonade and a cheese quesadilla. The park was right across the street, the sun was shining and felt warm on our faces, so we went for a walk to feed the ducks.

There were all kinds of hungry birds there:  pigeons and ducks and geese.

It didn’t take long before my crumbs began to disappear. After I gave them nearly all that I had, they started to waddle away to find someone with more food. So I decided to visit the geese. 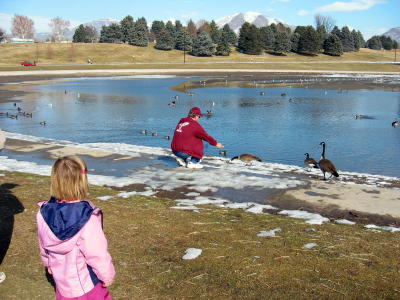 The geese wanted a snack, too. But I didn’t have anything to feed them so they went away to see this man who had a whole bag nearly full of crumbs. They were either so brave or so hungry they come very close so they could eat from his hand.

I wanted to see if they would eat out of my hands, too, but I was all out of crumbs. I could only walk closer so I could watch. They were very curious and came very close to me to see if I had something to feed them.

Then the man shared some of his crumbs with me so I could try. But a big old, bad goose grabbed it from my fingers so fast that he pinched them with his beak. It hurt, but I was brave and didn’t cry.

After I’d had enough of feeding ducks and geese, and the wind began to feel very, very cold, we decided to walk on, back to the car. But not before thanking the man for sharing his crumbs with me.

As we walked on to the car so we could all get back home to get warm, I asked Grandma if I could take some pictures with her camera. She said “why not” and let me. 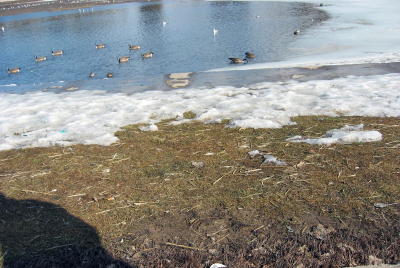 So I took this one of more cold ducks in the pond. I’m sure glad I don’t have to live in a pond.

Just one more picture, please, Grandpa? So Grandpa posed to let me take a picture of him by the car before we went home. Don’t you think I did a good job?

After we were back home, I decided to change my clothes and go back to being the pretty princess than I am–most of the time. Do you like my pretty pink princess shoes peeking out from the dress hem? And my pretty pink hair that falls over my shoulder? Big brother missed out on the whole afternoon at the park! Next time I’ll bet he wants to go too. Maybe I’ll let him.