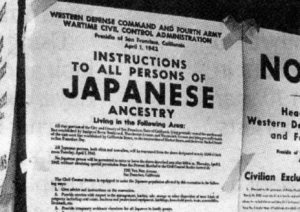 Imagine if you were born in this country, or legally immigrated, and as a result of abominable actions by another country’s leaders, you were rounded up and herded into makeshift prison camps without legal redress or trial.

That’s exactly what happened to Japanese-Americans in this country in 1942 when President Franklin D. Roosevelt issued Executive Order 9066. While they were only imprisoned and not killed, some died while in captivity and weren’t around in 1988 when the Civil Liberties Act served to “acknowledge the fundamental injustice of the evacuation, relocation, and internment of United States citizens and permanent resident aliens of Japanese ancestry during World War II.”

Now in her 80s, my friend Eiko, now living in northern California, lived in one of those camps, Topaz, located near here in Delta, Utah. She been working on oral and written histories for various media and news organizations such as NPR. When I asked if she could share a few words about her experiences to commemorate the Japanese-American Day of Remembrance tomorrow, she was happy to do it.

I do hope you’ll stop by and read Eiko’s experiences. What I find about Eiko and many of our typewriter generation and older, is that she has learned to look for the positive side of this or any bad experience. That’s one of the pluses of growing older, I think.

For those of you lucky enough to be living in Utah, I understand there’s a museum and momument in Delta open to the public. I know it’s a day trip for me, and I hope to be able to fit it in sometime during my busy summer. I’ll be thinking of Eiko and her family every single minute.