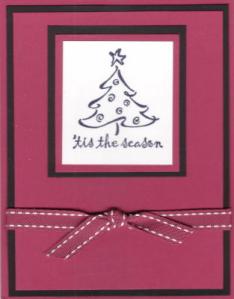 Look what I got in the mail yesterday! A Christmas card from Nina in Columbus who sends me two cards a year–both homemade–one for my birthday and again at Christmas. For some reason I cannot throw this kind away, not even years later. They’re added to all my other letters and cards in my “memory bin.” This card reminds me that my favorite “gifts” of the season, and those likely to be remembered forever, are those that are homemade by the giver. I think it’s pretty special when people expend a little of their most precious commodity, time, to make something for me that says “Hey! I remember you!”

One year my cousin’s wife gave my mother a box of homemade chocolate candy as a Christmas treat. Not only did it look like candy you see in the candy shops at malls, it tasted every bit as good. Naturally, I asked Mama to ask for the recipe. It took several months and reminders but one day I opened a letter from home and found this recipe, which turned out be very simple to make. As I age, shortcut cooking is one of my favorite ways to cook.

Hubby and I usually bake Pizzelles and Chewy Noels plus a few other favorites and distribute them to our closest neighbors during the holidays. This year I’ll probably make this candy again, since it’s so easy, and I thought I’d share it with those of you out there who like making your own confections as gifts during the holidays. As written, the recipe yields about 100 pieces, but I think it would be easy to halve it for a smaller batch.

I don’t know what it was originally called, but ever since Mama wrote these words across the top of the blue-lined tablet paper she copied it on, (another addition to my memory bin) I’ve called it:

Melt chocolate chips and wax together over low heat (or microwave or whatever method you prefer). Insert toothpicks into balls and dip into chocolate mixture.

UPDATE: I forgot to tell you, be sure and chop the nuts as finely as possible without making it into pecan dust. It would be hard to roll into little balls with whole halves.

*Mama frequently referred to all margarine in recipes as “oleo,” as did many women of her generation. I always used real butter. If I’m going to gain weight, I want it to come from real 100% bona fide animal fat!

3 thoughts on “Homemade for the Holidays . . . Candy Like Pat’s”