It seems to me that a natural followup of yesterday’s posting (Britney or Shakespeare), with a special emphasis on the 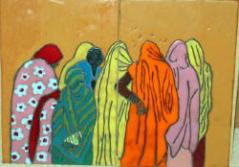 third of Tolstoy’s observations about art would be these recent artistic attempts of my own. First is “The Sisterhood,” from a photograph I took on a 1998 visit to Rajastan, India, showing native-garbed women gathered together in solidarity in the marketplace. Below on the right is “Little Girl With Butterfly” showing the serendipitous moments of new discoveries in childhood. It was taken from a photograph of my then year-old granddaughter. These pictures were made by hand glazing two 8″x12″ tiles and will eventually be glued together on a hard backing suitable for framing (the basement has rats that need to discouraged by fright). The mistakes are blaring: the dimpling in the blue background on #2, for instance; also the dark skin color resulted most likely from too-old glaze. 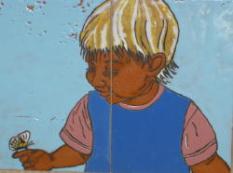 While it was interesting and fun to try this medium taught by tile artist Lark Lucas I was disatisfied by the results.

In a second, more advanced course of the same class on tile techniques, Lark suggested I try something different. We discussed some of the various things one might do with clay other than tiles, Lark insisting all the while that I would eventually “hear the clay talking to me, telling me what it wanted to be.” Yeah, sure!” Easy for her to say, but after a couple of false starts, what my clay decided it wanted to be was a storyteller doll. 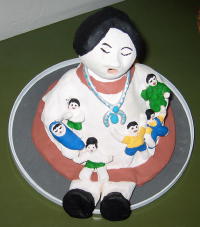 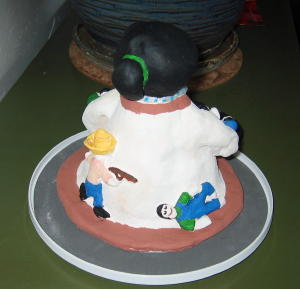 The painting still needs a little touching up, my fine-tune ability is limited with arthritic fingers, and Lark has graciously offered to help. But this is what I’ve been able to do with a lump of clay so far. I should point out the little cowboys on the doll’s backside are obviously playing a game of cowboy/Indian just as I did as a kid. While the clay was still wet and unpainted it looked like kids murdering each other, so the paint detail made quite a difference. Not to worry. It’s just child’s play, folks! The dead kid looks pretty happy to me!