A few weeks ago I heard a radio report about UPS and the money they’ve saved over the past year simply by using a GPS (global positioning system) to implement a new driving policy of right turns only for their little brown trucks. They use a “package flow” system that involves packing and sorting cargo and mapping out routes for their drivers before they begin deliveries that has saved three million gallons of gas and reduced carbon dioxide emissions by 32,000 metric tons as well. Hard to wrap your brain around that in order to relate? Well, according to the Chicago Tribune online, it’s the equivalent of taking 5,300 passenger cars off the road for a year. Impressive, huh? 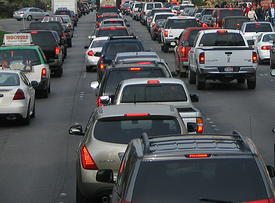 I was immediately reminded of my friend Suzy in Tennessee who told me once, as we discussed different ways we learned interesting things about the new places we moved to, how she and her husband took a Sunday afternoon drive once with no set destination–right turns only–to get out of the rut we all fall into driving the same old way and seeing the same old places so long we eventually don’t see them anymore. They treated the whole escapade as a game and had a fun and unique afternoon and actually made it back home without any left hand turns. Of course that was around 15 years ago when gas prices were conducive to such shenanigans.

I can see the logic of course. Left turners are the lowliest group in the driving strata, meaning they have to be ready to yield to everybody, always being the last in line except if they’re one of those pushy drivers, and we of course don’t have any of those in Utah. Sitting with your car and those behind you idling while waiting to turn left does waste gas. Plus, there’s the occasional nervous left turner who invariably makes you miss your turn and everyone has to wait another whole cycle, while the line behind you and driver impatience, your own and others, grows.

Then there’s the safety factor. Avoiding left turns does reduce the number of times you turn across oncoming traffic. Mostly I avoid left turns, much to Hubby’s chagrin, because I’m too impatient to sit and wait for long. In the busiest intersections, I’d rather drive a block or two out of my way and keep moving than sit and idle through two or three light sequences waiting to turn left.

While I’ll own up to my share of left-hand-turns, the UPS right-turn-only policy does open interesting new scenarios played out inside my head. I found myself lying awake one night unable to fall asleep (it happens as you age, I’m told) and thought about Suzy’s no left turn drive and the UPS right turn only policy. I lay there who knows how long trying to map out routes mentally from our hilly neighborhood to the places we traditionally go–the movies, the university, the museums, the hospitals and labs, the doctor’s office, and so on–and consequently lost a lot of sleep.

In my pretend drive I run into trouble right away. After I back the car out of the driveway, I turn right and wind my way down the hills to the main road below. With no left turns I continue to drive around and around through the hilly terrain trying to leave the neighborhood without a left turn. The more I drive–even though it’s only in my head–the more lost I get and the more awake I become until my brain is reeling trying to remember what other road might get me out. Actually, I don’t think I can get down the mountain without a left-hand turn somewhere.

Gas is too damned expensive to take random Sunday drives now, not just for Suzy in Tennessee but for every Tom, Dick and Harry in every state, U.S.A. Even if it weren’t, I would hope the same said Tom, Dick, Harry–Suzy also–are more aware of excess gas consumption and everything else these days as well. I know I am. As for UPS and their little brown fleet, I have only this to say: “May the wind always be behind your little brown trucks, and all your turns right-handed.” And inasmuch as it’s possible without losing anymore sleep over it, I’ll be right behind you.