There are only two reasons you’d ever find themselves in Death Valley Junction, near Death Valley, California. You’ve stumbled on it on the way to somewhere else, or you’ve heard or read about and come to see Marta Becket. The Amargosa Opera House and Hotel is her dream come true. As recently as 2006 and 2007, Marta had booked performances at her lovely opera house in the desert.

If she is still alive today, she would be 84 years old. Come along with me now for a little tour of an opera house in one of the unlikeliest places in the world to find an opera house, in a place that would probably not even be on the map had she not discovered an old theatre that nobody else wanted while her husband took care of getting a tire fixed. Ladies and Gentlemen, The Amargosa Opera House: 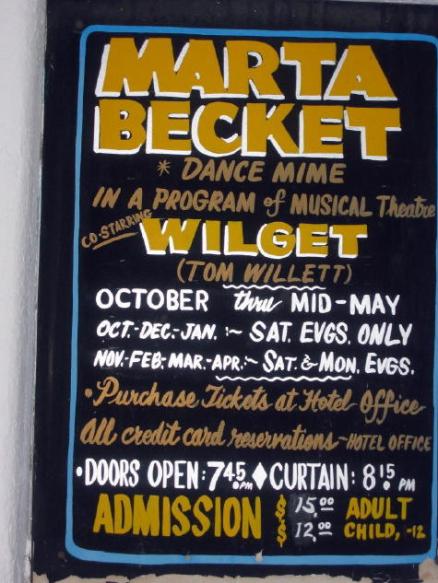 These pictures were taken around 2002 by Hubby and me when we attended this sold-out performance. Her long time friend and companion Tom Willett, who died in 2005, was still the Master of Ceremonies. He warmed up the audience before the show and assisted her during the performance of her burlesque routines.

Marta spent seven years handpainting the ceiling and walls with stunning murals and has danced there ever since. She always said she doesn’t try to guess what the years ahead would bring, so as far as I know she’s still dancing.

Many times, in the beginning, she danced whether anyone came to see her or not. Then she decided to paint her own audience on the wall, so that she would never have to dance in an empty theatre again. In the early to mid-2000’s, empty halls were not a problem! 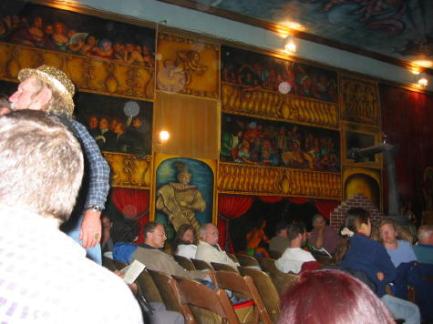 This quote is from a book review by Dean Speer (from Ballet & Dance Magazine) of To Dance on Sands, the book Marta published in 2005:

“She is smart in telling a story rather than giving us a tedious, diary-like recounting. I felt like I was on her journey with her. I was taken with how she realized early in her life that she wanted to dance but couldn’t get lessons until nearly too late. The saga of how she and her mother watched classes at a handful of New York ballet schools, including the School of American Ballet, trying to figure out why her current teacher was apparently not giving her what she needed, was moving as well as familiar – to which so many can easily relate.”

There is so much more I could tell you about Marta, but I think you’ll enjoy far more meeting her for yourself in this video clip from the popular travel series, Wild Nevada. Immediately following is a trailer from the documentary AMARGOSA, almost as beautiful as Marta herself. I will only add that, should you find yourself in this desolate junction at the Valley of Death in California, be sure to visit the Armargosa Opera House and Hotel and see for yourself Marta’s dream come true.

5 thoughts on “To Dream, Perchance to Dance”