Most of America already know that Salt Lake City is is located in one of the–if not THE MOST–red states in the country, and that there are a lot of Latter Day Saints here. State wide statistics say around 62% although the figures for SLC is considerably lower, somewhere between 30 and 40%. What we do know for sure is that, ever since Brigham Young assumed leadership of the flock after Joseph Smith was assassinated in the Missouri massacre in 1844, and took off to find “Zion” in Mexico but landed here somewhere in the nearby mountains, woke up to view the great Salt Lake and valley below and announced to his followers that “this is the place,” Utah’s Mormons have greatly influenced culture and daily life here.

What I want to say upfront is that this post is not meant to be a slam against the Latter Day Saints (I’ve learned since moving here, that Mormons prefer to refer to themselves as LDS rather than “Mormons.” I’ve also learned not to automatically say LSD, which comes to my tongue much more easily than LDS!). Rather this post is more an attempt to show how ordinary life is here in spite of its religious theme park ambiance.

Our friends could not fathom why Hubby and I decided to retire here, rather than the laid-back atmosphere of Las Vegas where we were living. (Actually, whenever you get away from the Strip and out into the residential areas, Las Vegas is quite a conservative city, but that’s a post for another day.) Several told horror stories of being chased down the street by Missionaries. One advised us to hold on to our house there, and rent a place here for 6 months to see if we could take living here before a big real estate commitment. They cautioned that I’d be answering the doorbell and finding well-dressed young men with messages to give almost on a daily basis. The fact is, I answered (or ignored) the doorbell to those same young men a couple of times a month during our eight years in Las Vegas. Interestingly, not one has visited in our year and a half  here so far. Furthermore I don’t miss the weirdness of the Las Vegas scene since I can usually count on one or two bizzarre anecdotes to brighten my day as I open my newspaper every morning! For starters:

Lee Redmond lives in Lehi. She’s 66 years old and hasn’t cut her 33-inch long fingernails since 1979. She appeared on the Ellen DeGeneres show last fall, and when Ellen handed her a roll of toilet paper and asked her what we all want to know–how she wipes–Redmond pinched a handful of tissue between her thumb and forefinger. She then proceeded to give the audience a demonstration, stating at the same time, “very carefully.” She’s been a regular in National Inquirer and I know if you do a search on YouTube, you’ll find her there, too. Vegas, eat your heart out!

Here are a few other bits of interesting trivia I’ve learned or collected since moving here:

One thing that I attribute all the weirdness around here to is the strict dietary laws of the LDS population. Consider: No alcohol. No tobacco. No coffee. No Tea.  (although there are lots of coffee and chai shops scattered about the city, not every corner, but lots) No illegal narcotics.

A few of these could come close to explaining several things, don’t you think? Higher birth rate, higher LEGAL drugs, lowest smoking rates. I mean, what else is there to do? Oh yes, I forgot. Grow long fingers and/or make jello and attend church suppers!

I leave you with my own favorite bit of recently discovered weirdness, again in (guess where?) Lehi, Utah. (Now that you know how ordinary in its weirdness Salt Lake City is, y’all come check us out here, y’hear? I’ll leave the porch light on for you.) 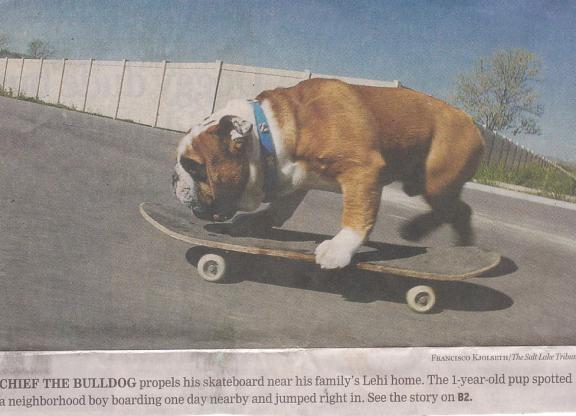 9 thoughts on “Living in a Religious Theme Park . . . aka Salt Lake City”